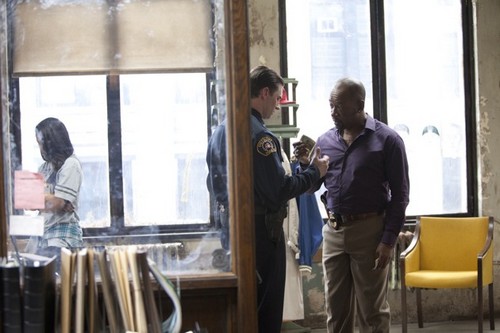 Tonight on AMC their new gritty, edgy and provocative crime drama, LOW WINTER SUN returns with their forth episode called. “Catacombs”.  On tonight’s tension rises in the Blind Pig.  Did you watch last week’s episode?  We did and we have a full and detailed recap here for you.

On last week’s show Frank and Geddes worked to cover up the evidence in McCann’s murder. Damon’s crew prepared for the blind pig opening.

Although I am enjoying the show it is not getting great rating even though it is aired right after AMC’s popular show Breaking Bad.  Each week the ratings are tanking, last week was another all time low.  It is doubtful unless things really pick up it will be renewed for a second season.

I am so excited for tonight’s second episode, it looks like it is going to be a great new show, which you won’t want to miss. So be sure to tune in for our live coverage of AMC’s Low Winter Sun Season 1 episode 4 — tonight at 10 PM EST! While you wait for our recap check out the sneak peek video below of tonight’s episode!

RECAP: Frank walks up to some bar with a random person sitting there; he grabs a seat and then asks about a Romanian girl who has blonde hair, emerald eyes and white skin. The guy hands him over a flier with girls on it and he finds her picture and says he wants her. Frank is sitting in a hotel room waiting for this girl and starts watching TV until he hears a knock on the door; he turns off the TV and sees this girl who wasn’t who he asked for. The guy takes some money and the girl walks in, he says he can open the curtains for since she walked over to them. He explains how he’s trying to find a woman there and she doesn’t understand; she walks over taking off her clothes and he tells her no. He offers her a drink, or something instead; she goes and takes a chocolate bar. He offers room service and she says no, he sits with her on  the bed and she goes over to him. He tells her no and asks who’s controlling them; she yells out and he keeps her quiet. He takes his hand away from her mouth, she runs over and yells again; he shoves her into the bathroom. Frank opens the door and gets hit in the head.

Joe asks why Simon is looking at him; Simon says he’d prefer to talk to Frank instead. Joe says he’d like to shove his head in a toilet, Joe’s daughter is brought to the station for stealing. She stole chips and condoms; she called her mom to pick her up. Joe cuffs her to a desk and is completely pissed off with his daughter April.

Damon is talking about the money with Mike, Damon says they have to have eyes on their competition. Some young girl walks downstairs; Damon asks why she’s there and she just says she heard she can make money and walks off. Frank visits Maya’s place and asks for a coffee. She questions why he’s here, she mentions how she kicks out Shaun a lot but he wants to know about her and Damon. She asks about Brendan; he says that the bar is in the file they had on Brendan, she says he only dropped in for a drink. Frank tells her whatever it is she’s in then she should stop; Joe is arguing with his ex about cuffing their daughter. Frank walks over and says hi; Joe then says he will take his daughter to live with him but April doesn’t want to live with either of them. Joe tells her to relax please; Simon comes over and basically tells them about the chopped body leads to a hooker and could find the killer to Brendan. Simon asks Frank to join him and the two leave.

Simon and Frank are at a bar and the bar owner says she never saw many white people in her bar; Simon asks about prostitutes and if there’s a place they could take the woman they meet nearby. The woman says she has no idea; Simon walks off and Frank tells her sorry for everything. Dani asks about a boy mother named Billy who’s dead and anything about him, they say that he had some thing for a guy and they tell her the name and she walks off. Joe says he wants to kill Simon and Frank says that’s not possible and that they got to be good cops. Joe says they got to pin the murder on somebody; Frank says no and they will let the case go cold. Frank says they got to get back and take care of his daughter, Joe stops the car and gets out saying it has been a long week. Joe walks into a building and Frank sees these two people fighting and drives near them. Frank finds this homeless guy who starts running and tackles him down; the guy gets caught and then starts joking and says he’s not bad. He’s just drinking and feels good, he offers Frank a drink and he has his own and starts drinking with him. Damon is at a club and mentions to the people that there will be no underage girls. These two guys get into a fight and one of them burns the others in hot oil. Damon takes his guys hand and shoves it into the oil; then says they’re even.

Frank is with his homeless friend; the homeless man is playing hockey with a really crappy hockey stick made out of a stick and bottle at the end. The guy asks about Maya and he says she’s fine; he gets upset and hoped he’d say she’d feel like crap. He hasn’t seen her for a long time, Frank asks about Brendan and tells the homeless guy he’s dead. The guy doesn’t believe any of it, thinking it’s pretty crazy. Frank asks him where he’s living these days and if he can help; the guy says he’s good; Frank gives him his bottle of alcohol and tells him take care.

Dani finds this man who knew Billy and his name is Daryl; she tells him that he’s dead. Dani tells him how his friend was shot in the head and had his face chewed up by stray dogs; he says how Billy and some ugly fat dude were together. Maya tells Damon about what Frank says they’re in Brendan’s file. Frank listens to the voice message over again of his previous lover and gets pissed. Joe goes into a convenience store and buys his daughter a drink; he is taking her to live with him and her grandma. Joe says he can take her back to her mother if she wants, he mentions his case and how it’s taking up all his time and she says he must have been on it for the last 13 years. Maya meets some woman starts smoking, she offers her friend a smoke but she says she quit for her kids.

Frank goes to a bar and meets with a woman and asks her about a white woman who comes sometimes, she tells him about a place called Catacombs. Joe stops at some place and asks April to go with him. It’s to visit Billy’s mother, she says that somebody already cam and Joe says sorry. She notices his daughter and tells her to show her face, she calls her pretty; he tells his daughter to leave with him and says he’s sorry for her loss. Damon has some guests at his club and the guy tells him to remember where he’s from. Damon gets pissed off at him and the two get a little aggressive; the man is then forced to leave. Frank sees a prostitute and she asks if he’s a cop; he says he’s looking for a place called the Catacombs; he just wants to know who they are and gives her money for the information. Frank goes down some elevator in a building and is greeted by some guard that checks him for weapons. He’s being led through some dark place and then finds a man at some podium, he says he can have anything he wants. Frank asks for a girl with emerald eyes who is Romanian. Frank is led in the dark again, he’s brought to a room where the girl then says she will do whatever he wants. She says her name is Catia exactly the same as the girls he use to love, he just doesn’t believe it’s her. The two start kissing, he asks what colour are her eyes and she says whatever he wants them to be. She then tells him she will be whoever he wants.

Joe gets back to the office and tells Dani he met Billy’s mother; he calls the woman a piece of work and says the person in the trunk had a relation to him. Dani tells him about Daryl and how she met him and how he doesn’t work with Billy at all and that some fat white boy was his new partner. Joe tells his daughter to grab her crap and they should go; Frank is driving alone at night and has this dead serious look on his face as if he’s deep in thought.

Frank arrives at some house and finds his homeless friend sitting outside his house with the neighbors cat; he says he could have broke in but didn’t. Frank walks in and leaves the front door open; he grabs two beers and comes back to the front steps and sits with his friend; the two drink and the homeless guy asks where he’s been. He says Windsor and the homeless guy questions it; Frank says he went to find a woman.