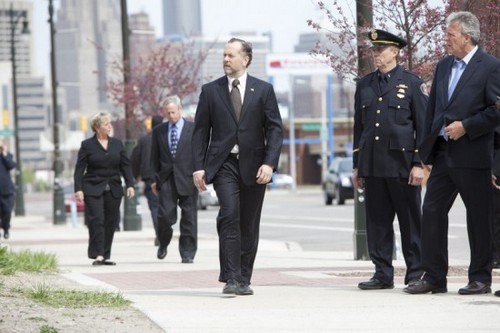 Tonight on AMC their new crime drama, LOW WINTER SUN returns with their third episode called. “No Rounds”.  On tonight’s Damon’s crew prepares for the opening.  Did you watch last week’s episode?  We did and we have a full and detailed recap here for you.

On last week’s show when the DPD searched the house of murdered detective, Brendan McCann, Frank found evidence that changed everything. Detective Geddes became the center of Boyd’s investigation while Damon and Maya were forced to reevaluate their plans.

On tonight’s show Frank and Geddes work to cover up the evidence in McCann’s murder. Damon’s crew prepares for the blind pig opening.

I am so excited for tonight’s second episode, it looks like it is going to be a great new show, which you won’t want to miss. So be sure to tune in for our live coverage of AMC’s Low Winter Sun Season 1 episode 3 — tonight at 9 PM EST! While you wait for our recap check out the sneak peek video below of tonight’s episode!

RECAP: Joe is with Brendan and Brendan is cutting up a person; Brendan tells him to shoot the girl Mike loves in the head and to dump her in the river. Joe tells him no but he replies with them suffering if she lives. Joe is now in a church, then he’s driving with the girl and mentions how he has to put her in the water. Joe is at the river and tells her that he’s catholic and believes she is too; he tells her they should pray. Joe then tells her if she makes a sound he will shoot her, he takes off the gag and dries her eyes. Joe is now on his way to Canada, he lets her free and he tells her that she is dead and that he killed her; he mentions how if he ever hears of her ever again that he will find her and finish her off. She gets out of the car and gets into another and is driven off. Back to Joe in the church and he says he should have killed her.

Frank enters a boxing gym and starts sparring. Charles is on the phone with a woman who tells him that he has disappointed the mayor and Frank walks in; he tells Frank he’d drop kick the woman if she weren’t married to the mayor. Charles tells Frank he needs something at the end of the day, Frank then mentions that he will keep Joe in a cage. Joe walks up to Frank and the two of them get coffee, Franks then mentions how Joe is being suspected by Simon. Maya at the diner pours a coffee for the weird guy and she tells him that Damon is looking for work; he just pays for his coffee not caring.

Joe and Frank are in a meeting with two men, after the meeting Frank asks Joe why he was so close to one of them; Joe mentions it is nothing. Frank doesn’t believe he’s telling the truth, Joe then says that he’s just covered in Brendan’s crap. Frank then tells Joe he will rat him out.

Frank is sitting in his car just staring at the house he burnt down with Joe, he drives off. Joe is getting ready for work and his mother notices a wound on him and patches him up nicely. Frank arrives at the service of a dead cop and meets Simon; Simon mentions how Frank questioned Alexander. Frank then tells him to the papers and then tells him that he believes Brendan was murdered by another corrupt cop; he gives his condolences and walks off. Frank and Joe are at a bar with others from the department and they all take a drink, Charles says he can’t drink no more because he needs to drive home. Joe sees Simon and says he feels disturbed by him, Dani then asks Frank why he’s there and he mentions how he’s not mourning for Brendan but just drinking.

Damon and Nick are at their isolated house preparing their business. Joe mentions how Simon has no respect for being there, Frank tells him that he’s there to show off what happens to them.

Alexander enters Maya’s bar, she tells him his money is not due yet and he says he’s not there to collect. He pours them drinks and gives it to her, they both drink and he mentions about the dead officer and how he should slow down and if he does she does. He asked her to promise for her husband Damon not to be rebellious. Simon asks Frank what Brendan could have done before being drowned in the lake with having different water filled in his lungs; he believes Joe is the prime suspect. Frank covers him and believes that a cop wouldn’t kill another cop, Frank asks Simon why he trusts him; Simon tells him he distrusts him the least. Damon is sitting there and snorted some of their cocaine.

The lights go out and one them believe they fired the wiring in the house, Damon says the need to boost the power. He drives up to some place with Nick; Nick points out a guy who can help them at this construction site. Damon and a couple of guys get out of the car while Nick stays back, the guys put masks on their face and go out after the guy pointed out. Frank and Joe are together, Frank tells him that Simon believes Brendan died after he left the house. Frank asks if he has a good alibi for that time; Joe says he does. Frank then makes it clear nobody goes down for what they did. Dina says that they have a suspect who beleives he saw the two men who drowned Brendan’s body into the river.

Frank and Joe enter the room with the suspect, Frank asks why he was there so late; he says he’s a machinist and works late. The guy says he saw a ford explorer with a black and white guy who ran the corpse into the river; he says he has good eyes and Joe asks how they did it. He mentioned how they used a jack and something heavy on the gas pedal; they leave the suspect and realize that he doesn’t even recognize them. Damon is now at some party and meets Maya there, the two kiss. Joe and Frank sit down with the suspect again, the coffee Joe gave him was cold and the suspect is sad. The two find out that he is behind on child support and how he got a DUI, the suspect came to get paid. Frank and Joe tell the suspect that he will have to testify before he makes any money for what he saw; they tell him to tell them again. Damon and Maya are drinking together and he mentions how believes they’re going places with what he’s doing. He believes he’s going places, she tells him that they should slow down a bit having been warned that they should be smart; Damon says that he’s got it all handled and that she should trust him.

Frank and Joe ask for him to describe the men, the suspect said that one was black and the other was white; the suspect the mentions he thinks the white guy could have been Arabic. Frank and Joe leave; they speak to Charles and believe that it sounds really made up and that people won’t take him serious. Charles said it is progress and that they should get a sketch artist to meet with him; Frank is back at the gym now throwing to punches against the mitts. Frank challenges someone to spar, the guy starts punching the hell out of Frank and just gets a hook to the face.

Joe gets a text with the portraits of the two people and has a really weird grin on his face, he’s happy that it looks like he is in no way close to being caught. Frank listens to the voice message over and over again of the girl he loved. Dina then walks into the diner and sits with him, she mentions how the portraits are being distributed so that they could possibly find the people who killed Brendan. Dina says she doesn’t think he case is going to end well, she seems pretty down about it all. Frank is making his way across the Canadian border, obviously going to look for his old love.