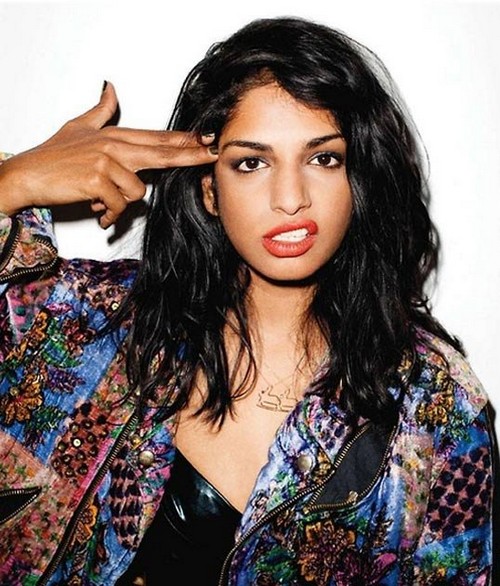 Lately, there’s been a raging debate about what should be allowed on prime time television, and what should be banned. With the controversy over Miley Cyrus‘ twerking at the VMAs, there’s been a lot of concern from parents over the suitability of these types of major events for their children. Another example is M.I.A. flipping the finger during the 2012 Superbowl. Although it doesn’t compare to Janet Jackson‘s nip slip in terms of controversy, MIA’s decision to show her middle finger was voluntary, unlike Janet’s wardrobe malfunction.

According to new reports, the NFL is now suing MIA for $1.5 million for ‘breaching her performance contract‘ and ‘tarnishing its goodwill and reputation’. However, MIA’s lawyer continues to stand by her side, and this incident doesn’t compare to others of much more magnitude, explaining, “She is going to go public with an explanation of how ridiculous it was for the NFL and its fans to devote such furor to this incident, while ignoring the genocide occurring in her home country and several other countries, topics she frequently speaks to.”

Her lawyer also adds that the NFL is being hypocritical when they’re discussing their reputation, saying, “Of course, the NFL’s claimed reputation for wholesomeness is hilarious in light of the weekly felonies committed by its stars, the bounties placed by coaches on opposing players, the homophobic and racist comments uttered by its players, the complete disregard for the health of players and the premature deaths that have resulted from same, and the raping of public entities ready to sacrifice public funds to attract teams.” I agree with M.I.A.’s team on this one.

Although I think that major events like the VMAs and the Superbowl do need to set some sort of allowances for the type of behavior that’s allowed on stage, I think suing M.I.A. for $1.5 million dollars is ridiculous. It’s not like the NFL is the most wholesome organization out there, and they frequently feature things that are more offensive than a woman showing off her middle finger during a performance.

What do you guys think? Should M.I.A. have to pay the money or is the NFL just being ridiculous? Is the NFL trying to warn future performers by this lawsuit – scare them so they won’t embarrass the league? Let us know your thoughts in the comments.