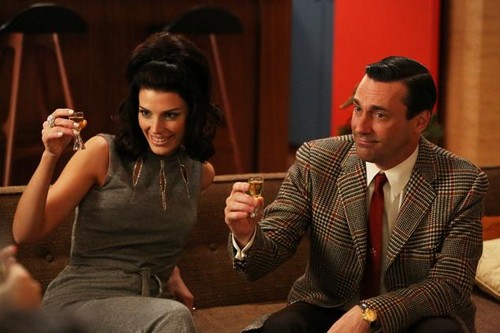 Tonight on AMC Mad Men finally returns with a new episode called, “The Doorway.”  On tonight’s show Don launches a new campaign, while Roger receives some unnerving news and Betty welcomes a houseguest.

On last season’s season finale the show ended with opportunities for everyone in the agency while Pete met an interesting stranger on a train. The episode was called “The Phantom” and appropriately so since Lane’s memory will hang over the office like a phantom having killed himself in his office. If you watch to catch on on the show before tonight’s season 6 premiere, you can read a full and detailed recap here!

On this season’s show creator Matthew Weiner says it is the penultimate season.  He said, “This season is very much capturing what’s going on right now, in a strange way. I think we have been thrown into a state of individual anxiety, based on being disconnected from events outside our control, including economic disarray.”

On tonight’s show Don, Peggy, Joan and the whole crew are coming back, yay!  In the Season 6 two-hour premiere, Don spearheads a new campaign, Roger gets some unsettling news, and Betty takes in a houseguest.  It also looks like although Don was being tempted by another women at the end of season 5, he and Megan are still together.

Tonight’s episode looks like it is going to be a great episode and you won’t want to miss it, so be sure to tune in for our live coverage of AMC’s “Madmen” Season 6 premiere at 9 PM EST! While you wait for our recap hit the comments and let us know how happy you are that Mad Men is finally back.  Check out the sneak peek of season 6 of Mad Men below.

Recap: Someone is getting their chest pumped, oh, it is Don on a beach and he is reading a book. Megan is afraid to get sunburned, she thinks she will get fired. The Draper family is in Hawaii on vacation. Don and Megan are at a luau at the Royal Hawaiian resort. It is late evening at the hula dancers are dancing, Megan wants Don to try but he won’t, that doesn’t stop Megan.

A fan of Megan walks up to her and tells her that she is much trimmer than on To Have and To Hold. Megan is clearly taken by the attention and signs an autograph for the fan’s niece.

Later that night, in bed, Don and Megan are sharing a cigarette and she starts talking about the fan. Megan tells Don how much she loves Hawaii but he says nothing, they make out and when she falls asleep, Don heads to the bar.

Don is sitting at the bar and some guy sits beside him who is getting married in the morning and starts telling Don about how he has to go to Vietnam right after the wedding.

The next morning, Megan wakes up naked, to find that Don is not in the room. She heads to the balcony, then gets dressed to go outside and finds Don by the beach, he is a witness to the wedding.

Betty is with her mom and kids in the car after leaving a Nutcracker and gets pulled over by a police officer. Betty’s mom tries to get her out of the ticket, but he says she was speeding and there is no way.

At home, Betty admits to her husband that she got a ticket, but it wasn’t for speeding, it was for reckless driving.

Don and Megan are home, they arrive and the door man all of a sudden hits the floor, looks like he has a heart attack.

Betty is in bed, Henry tells her how much he enjoys the violin that Sandy played, Betty joking tells him to go in her bedroom and rape her and she will watch, is she nuts?

Peggy is home, the phone is ringing, it is Burt Peterson and he tells her that she has to change a client’s ad, she needs to call Ted.

Don is in the elevator with Dr. Rosen.

Roger is in the office with his doctor, he is complaining about people that say hi to him at work and know nothing about him. Roger goes on about how things you experience are supposed to change you, but they don’t.

At work, Peggy has walked into the boardroom and they are talking about a “Lend Me Your Ears” campaign that is now in bad taste because of an an ear joke on the Tonight Show about American soldiers wearing necklaces made of human ears.  Burt wants to know if Peggy got in touch with Ted, she didn’t.

Don is back at work, he is in the elevator with Bob who reminds him that they spoke at the Christmas party, he gives Don a coffee. Then Bob tries to get in a talk about football, when the two walk in and find Don’s creative team with Stan hard at work. Everyone comments on how tanned Don is. Don says he had an experience that he can’t put into words.

Don finds the staff taking portrait pictures, Pete is first, then Sally when Roger walks in. Don walks into his office and finds things moved around, he doesn’t like it. Don stares out the window and reminisces about Hawaii.

Peggy is in the boardroom, she is not worried about the ad, she doesn’t think anyone is going to relate it to the joke on the Tonight Show, she tries to convince the client of the headphones. She goes on to tell him to give her a couple of days to come up with a new ad, when the client leaves the room Burt tells her to get in touch with Ted.

Don has a new campaign “Love Is In The Air” but he doesn’t like that his team have drawn a newlywed couple for the ad, he finds it too matrimony. Dr. Rosen is at the office, he came to pick up the camera that Don promised him.

Roger gets tragic news from Caroline, his mother passed away. Don is getting prepped for his portrait, the photographer wants him to look lost in a confident thought. Don lights a cigarette and is having a hard time getting into the role.

At home the next morning, Megan tells Don that she has to work all week and won’t be able to attend Roger’s mothers’ funeral.

Betty just got home, she finds out that Sandy is not there, she went to Julliard.

Roger is at the funeral being greeted by people and Jane walks in. Jane tells Roger that she has his mother’s ring and is willing to give it back, but he tells her to keep it. Roger thanks everyone for coming, but Hazel wants to speak first. She says this is the way she lived and where she died, she was devoted to one man and devoted to another, Roger. She goes on to say that all they heard about was Roger’s accomplishments, he was her sunshine – then Don is sick, he starts to vomit. Roger is angry, he leaves the room.

Betty is downtown looking for Sandy.

Don is brought home and he is clearly drunk, the reason for the vomiting – he asks his doorman what he saw when he died. Roger is with Margaret, she wants to know if her grandmother left her anything, she means money. She goes on to tell Roger that there is this opportunity, she wants to invest in refrigerated trucks.

Megan is home, she finds Don in bed, he tells her that he put in an appearance at the funeral. Megan gives him the lighter he threw out, the one he inadvertently took from the soldier on leave in Hawaii that was inscribed with “In life we often have to do things that just are not our bag”, Rosa found it in the garbage and gave it to Megan because she didn’t want them to think she stole it.

Betty is still downtown looking for Sandy, she found this guy who Sandy sold her violin to. Betty takes the violin and walks out after the guy won’t tell her where Sandy is.

Betty is home, she tells Henry that she had errands to run.

The next day, Don is back at the office and Pete reminds him about Sheraton, Don tells him to re-schedule.

Roger is back with his therapist, he tells him about his mother’s funeral.

Ken just arrived at the office

Pete is in the boardroom with Sheraton, Don tells about his trip and how there is some kind of feeling you get that stays with you. It is an experience and they should be selling that, not the place. The people from Sheraton don’t agree, they want to see their hotel in the ad.

Roger is pissed with Don for being drunk at his mother’s funeral.

Betty dyed her hair, Henry loves it and calls her Elizabeth Taylor.

Roger gets more bad news, Goergian died and his family sent over his shoe shine kit because he was the only one that asked about him. Roger is alone in his office and starts to cry.

Megan and Don are having a dinner party when Megan has an idea, show their guests slides from their Hawaii trip.

Peggy is in the office when Ted walks in, he apologizes for not calling her as he was at a retreat with his wife. Peggy shows Ted some outtakes from the original footage for the earphones campaign, she has come up with a new slogan. Ted likes it, but tells her to let the staff go home, it is New Years.

At Megan’s dinner party, there is a phone call and Megan can’t believe they have missed midnight. The phone call was for Arnie, he has to leave, it was his service. Don needs cigarettes, he offers to go down to the lobby with Arnie. Don asks Arnie what it is like to have someone’s life in his hands, he says it is a privilege and an honor.

Don then heads over to Arnie’s apartment for a quick roll in the hay with his wife who asks him “What do you want for this year?”  he says, “I want to stop doing this”.  Then it is back to his apartment and to bed with Megan.