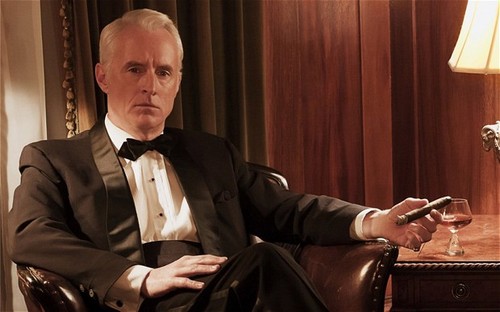 MAD MEN returned tonight with another fantastic episode, I cannot wait until next week.  Next week’s episode is called, “For Immediate Release,” and we have managed to get our hands on some juicy spoilers and a sneak peek video of next week’s episode.

On tonight’s episode they deal with the death of Dr. Martin Luther King and how it effects the different members of the show.  At a gala where Megan is up for an award the news hits about the death.  Regardless of the news that Dr. King was shot they decided to go ahead with the awards and Peggy was shocked.  Ginsberg father sets him up with a date, Beverly.  Ginsberg tells Beverly at dinner she is sexy and does not need to be set up.  She tells Ginsberg she agree to the date as a favor to her parents.  Gingsberg tells his father he can find his own girls.  Henry tells Betty that he has been offered a seat in the State Senate, it’s a Republican seat and he would have to quit the mayor’s office.   That fits perfect with Betty the snob, who is thrilled.  Did you see tonight’s episode?  We did and we recapped it here for you.

AMC official synopsis: “Roger will change his approach to make new business and Pete will have a run-in with a client.”

On tonight’s show Roger changes his approach to get some new business, Pete has an awkward run-in with a client. Sylvia went to DC with Arnold and Don hasn’t slept with her in days, is his affair with her all over? Pete is seen saying to someone “so you want something” in front of Bert and Joan. Something is up with Pete and we see more of that when Joan is heard telling him NO, in a threatening tone.

Mad Men Season 6, Episode 6 “For Immediate Release” airs on AMC on May 5th, 2013. Check out the preview video from episode 6 HERE let us know in the comments below what you think of Mad Men season 6 episode 6, so far?