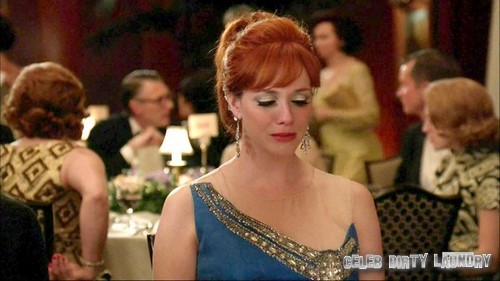 MAD MEN continued tonight with another fantastic episode, I cannot wait until next week.  Next week’s episode is called, “The Better Half,” and we have managed to get our hands on some juicy spoilers and a sneak peek video of next week’s episode.

On tonight’s episode the new SCDP/CGC were busy trying to come up with a new slogan for Chevy. Digging deep into his creative side, brought back memories for Don of his childhood. Frank Gleason died, his daughter Wendy is in the office and offers herself to Don but when he doesn’t bite, she has sex with Stan instead while Jim watches from the hallway.

Don spends the weekend at the office and doesn’t go home and when Megan has to go out, she leaves the kids who are visiting them for the weekend, home alone. A woman named Ida breaks into Don and Megan’s apartment and robs them, Don finally arrives home to find the police and passes out on the floor. Don takes full blame for what happened at his apartment and he also comes up with his idea for Chevy but doesn’t share it yet.  Did you watch last night’s episode?  We did and we recapped it here for you.

Spoiler alert: If you’re one of those people who doesn’t like spoilers, stop reading now! We have some juicy spoilers for you about the season 6 episode 9 AMC’s “Mad Men.”

AMC official synopsis: Roger is tormented by a recurring dream, while his former mistress Joan enjoys a trip to the beach.

On next week’s show Peggy arrives home and wants to know what is going on, I wonder who Abe has in their apartment. Megan is trying to explain to someone that “they want the same thing but they are trying to get it in different ways” and this is clearly making her upset. It looks like Don finally spills his idea for the Chevy account.

Is Pete’s next sexual liaison going to be with Joan? Meanwhile Pete seems to be at the end of his rope as he states that he no longer knows what to do. Don is seen driving in his car and it looks like he is spying on someone, Sylvia perhaps? We know Don is having a hard time getting over Sylvia and his broken heart and bruised ego are probably more the reason why Don passed out.

Mad Men Season 6, Episode 9 “The Better Half” airs on AMC on May 26th, 2013. Check out the preview video from episode 9 HERE let us know in the comments below what you think of Mad Men season 6, so far?