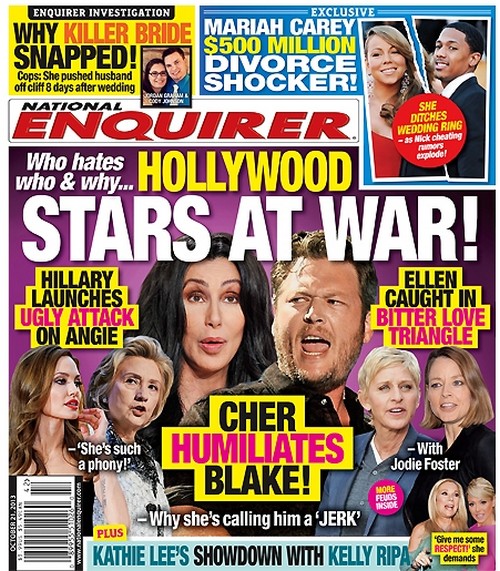 According to the latest report from the National Enquirer, Mariah Carey and Nick Cannon are looking at a $500 million divorce. The report claims that Mariah  has taken off her wedding ring among rumors that Nick has cheated on her.

I know this sounds bad, but I can’t blame the poor guy for doing it – if he actually did cheat on Mariah, that is. It is the National Enquirer, and we know their fan fiction writers are some of the best in the business. However, there has always been a weird chill between Mariah and Nick, and it always seems as though they’re putting on airs around each other in public. For being married for so many years, there should be more comfort between them, yet it’s always been missing at public events, in video and in person.

Regardless, Mariah literally just posted a picture of her own chest in honor of Nick’s birthday. It could have easily been to throw the public and the paparazzi off the scent, but is Mariah Carey really capable of carrying through such a complicated deception?

The Enquirer also has a feature of celebrities in Hollywood that hate each other, and according to them, Ellen Degeneres and Jodie Foster are trapped in a ‘bitter’ love triangle, Cher humiliated Blake Shelton, and Hillary Clinton launched an ‘ugly attack’ on Angelina Jolie. If this report is true, then people in Hollywood are even more jobless and vindictive than we thought.

Do you guys believe that Nick Cannon would cheat on Mariah Carey? They’ve been together for a while, and have been married over five years, so does he seem like the kind of guy who would screw that up? Let us know your thoughts in the comments.