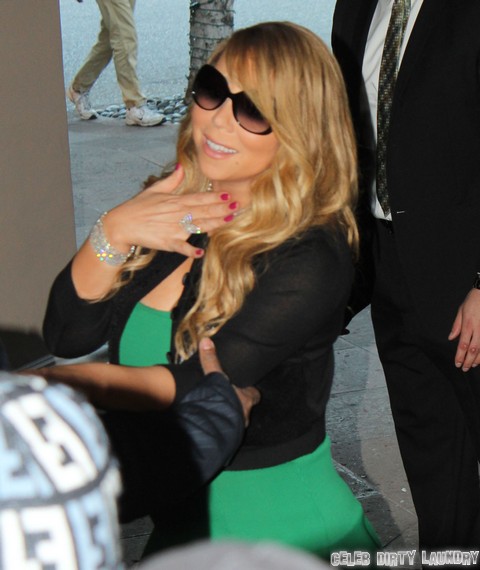 Nip slips seem to happen to all celebrities, but are rare in the real world. Why? Because most humans have basic control over their body parts! Keeping your breasts secure in your clothing isn’t difficult—women have so many tools to turn to. Besides normal bras, we have fashion tape (to secure clothes onto skin) and nipple tape, which just completely covers up everything. It’s not rocket science. You just put on clothes that cover you, accessorize with appropriate tape type, and then everything stays in. So it’s no accident that Mariah Carey suffered a nip slip over the weekend!

The declining diva has been struggling with her career for months. After infuriating Australian fans during a tour, Mariah got reviews that called her washed up and grasping at straws. Her diva antics and tired performing turned longtime fans against her. Now, she’s working as a judge on American Idol, which peaked years ago. The only publicity she gets now is related to the ongoing Nicki Minaj feud, or to nude scandals, like this one!

Kendall Jenner: Shocking New Display of Almost Nude Photos
Mariah was in Atlanta, Georgia this weekend celebrating the 20th anniversary of her friend Jermaine Dupri’s record label So So Def when the offending nipple burst from her too-tight (and icky . . . the detailing on her boobs looks like weird cat eyes!) dress, horrifying the live audience and all of us innocent internet wanderers. The singer seemed oblivious, and continued on stage without adjusting her top.

Besides the fact that Mariah can easily cover up her boobs in an appropriate manner, she has millions in the bank. Could she not afford a better dress—one that wouldn’t squeeze her nasty boobs out? Mariah’s face looks so squeezed lately—like her flesh is about to pop from her skin. It’s nothing personal, but she should probably bow out of the public eye gracefully and focus on her family. Do you think Mariah staged the nip slip?