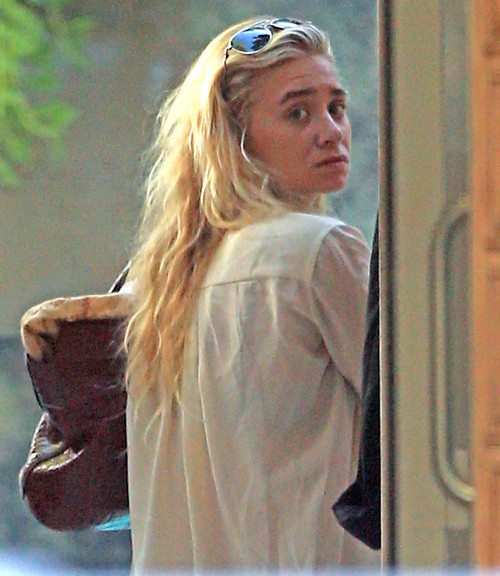 Mary-Kate Olsen and Ashley Olsen went from adorable faced pre-teens with a multi-million dollar empires to gothic fashionistas in the span of a few years, but are they really ‘fashion girls’? They definitely want to be, and I think to them, it represents the kind of freedom that was missing in their childhood. But even with that, how many times do you ever look at Mary-Kate or Ashley and go, ‘That’s a cool outfit, I want it’?

In fact, their dressing sense most closely resembles that of Cruella de Ville, and that’s not just me being snarky. In the end, their fashion empire is built 0n their brand name, not their actual fashion talent. So when a new report from the National Enquirer alleged that Mary-Kate and Ashley hated Jessica Simpson‘s fashion empire and were envious of its success, it’s not hard to believe it.

The Enquirer’s source claims, “[The sisters] compete with Jessica behind the seams, and while the pint-sized blondes also head a billion-dollar empire, they’re bitter over [Simpson’s] mass-market appeal. Mary-Kate and Ashley are regulars at all the fashion shows in New York, Paris, London and Milan, and dress way ahead of the curve. To them Jessica is flogging flannel and burlap to banjo pickers.”

If they really think like this, is it any wonder that they’re not as successful as Jessica? The whole point of Jessica’s success IS that she appeals to the majority of the American public, most of whom wouldn’t even fit into Mary-Kate and Ashley’s clothes. Obviously they’re not going to go for the snooty ‘upmarket’ brand name when they can go for something that will actually suit them. And as much as Mary-Kate and Ashley might want to admit it, Jessica Simpson is way more recognizable than them.

Twins Mary-Kate and Ashley Olsen checking out a store that they might be interested in buying on Melrose Place in West Hollywood, California on August 21