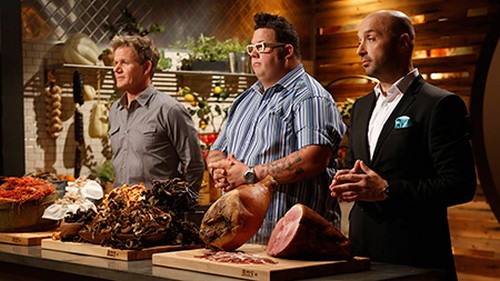 MASTERCHEF airs another 2-hour episode tonight on FOX with top “Top 9 Compete.” On tonight’s show, The remaining contestants create sausages for the mystery box challenge. Did you watch last week’s episode? We did and we recapped it HERE for you.

Last week on the show actress and restaurateur Eva Longoria surprised the contestants and selects Mexican-inspired ingredients for the mystery box challenge. The contestant who created the most impressive restaurant-quality dish would determine which food basket each of the remaining contestants would receive in the elimination round.

Later, in the team challenge, the home cooks hit the beach and cooked fish tacos for more than 100 hungry surfers. The surfers would determine the winning team, who will earn a huge surprise – tickets to the 2013 MLB All-Star Game in New York City airing Tuesday, July 16 on FOX. Meanwhile, the losing team faced a pressure test and had to cook a perfect chicken breast three ways. In the end, two more contestants went home.

Only nine contestants left. Their mystery box challenge today is to make sausage. They’re given various meats and non-meats like tofu (Bri will be happy). They only have sixty minutes for this challenge. Who will be the winner?

Who has fresh and who has canned? Jessie, Natasha, Luca, and Krissi have canned mushrooms. Eddie decided to give fresh mushrooms to certain people he felt would overplay their hand. Bethy forgot the main component for her dish and no one else has sugar to loan or so they claim until Jordan loans her some.

It seems Eddie was right. Three out four that got fresh mushrooms received the harshest criticism. Bri wins the competition and Natasha’s dish came in second.
James, Bethy, and Jordan are in the bottom three. Bethy is sent home. In next week’s episode the chefs are taken out into the wilderness. What kind of dish can they make there?