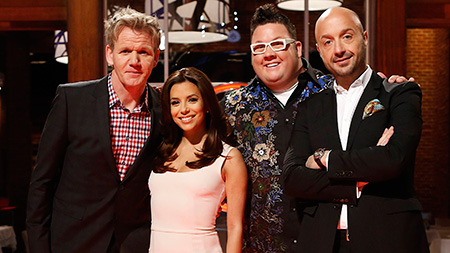 MASTERCHEF airs another 2-hour episode tonight on FOX with top “11 Compete/10 Compete.” On tonight’s show, Actress and restaurateur Eva Longoria selects a Mexican-inspired mystery box.  Did you watch last week’s episode? We did and we recapped it HERE for you.

Last week on the show the remaining contestants had to think on their feet when they cooked a mystery box challenge with the most unexpected ingredient and a limited pantry. Later, in the elimination round, Season Three Winner Christine Ha, the first ever blind contestant, returned to MASTERCHEF with a big surprise for the contestants. Then, the home cooks prepared an unforgettable meal for a wedding party. The winning team was safe from elimination, while the losing team faced a pressure test involving macaroons. In the end, two more home cooks were eliminated.

On tonight’s show actress and restaurateur Eva Longoria surprises the contestants and selects Mexican-inspired ingredients for the mystery box challenge. The contestant who creates the most impressive restaurant-quality dish will determine which food basket each of the remaining contestants will receive in the elimination round. Later, in the team challenge, the home cooks hit the beach and cook fish tacos for more than 100 hungry surfers. The surfers will determine the winning team, who will earn a huge surprise – tickets to the 2013 MLB All-Star Game in New York City airing Tuesday, July 16 on FOX. Meanwhile, the losing team faces a pressure test and must cook a perfect chicken breast three ways. In the end, two more contestants will go home.

The contestants are called to the floor to see a giant box. What’s in it? Nothing but the beautiful Eva Longoria. She’s more than an actress, she’s a restaurateur. She was in charge of handpicking all of the ingredients each contestant has in their own mysterious boxes. The ingredients are all spicy and Mexican inspired.

So many things can go wrong. Pork is an unforgiving meat and the contestants can go overboard with all the spices. Bri’s dish is looking good even if it is vegetarian. Although the plate the judges can already smell and love is Eddie’s.

Three dishes that Chef Ramsey calls up to take a closer look is Bri’s, Eddie’s, and Savannah’s.
Savannah is extremely happy because finally she’s called. Everyone gets great feedback but who won? Bri!

Bri goes into the pantry. The judges tell her she doesn’t have to cook for the elimation test. What she does have to do choose is which contestant gets whatever basket from Walmart. One basket has more ingredients than the other so she can attempt at least to knock out a competitor.

Everone returns to the other contestants. The judges then announced Bri is officially now in the top 10. The judges also tell the contestants how Bri choose the baskets. Bro chose Natasha. Natasha of course was snarky after hearing she was chosen but is later surprised she was given the steak. The steak meal is only allowed a cooking time of 30 minutes. The rest of the contestants were given the baking meal and a cooking time of an hour.

Bri knew Natasha could work best with baking that’s why she gave her the steak but Lynn is messing up right out of the gate. Even Chef Ramsey had to ask him if this is the night they say goodbye to him?

The food is finish and the judges are ready. People in jeopardy are Lynn, Savannah, James, and Krissi. Natasha pulled off a great steak and Jessie won the elimination challenge. The bottom three is surprisingly Lynn, James, and Krissi.

Lynn is sent home. For someone so high up in the competitor to fall so low just means no is safe.

In the second hour of tonight’s MasterChef the contestants have to deal with surfers. Set up as a team challenge the two teams have to feed the hungry surfers Fish Tacos. Because Jessie won the last elimination challenge, she’s team captain and gets to pick everyone on her team as well as pick the other team’s captain. Jessie chose Savannah to be the other team captain.

Jessie’ Blue team aren’t as organized as Savannah’s Red team. At one point they nearly run out of fish. They do manage to pick up the pace towards the end.

The first team that wins 51 votes wins the challenge. The red team started off with a 22 vote lead but the blue caught up to them and won. The Red team now has to do the pressure test.
The Blue, as a reward, go to an all-star baseball game.

The Red team has to choose one person who won’t participate in a pressure test. Once left by their own though tensions are high. Krissi is snapping at Bri and Savannah for calling her the weakest link. However they chose to save Jordan from the test. The test is to cook the perfect chicken breast. Sautéed, Fried, and Stuffed. They have to cook the chicken breast in these three ways. Bri as a vegetarian is at the most disadvantage. Two of her plates were raw. The only person who didn’t have a raw dish is Krissi.

It comes down between Savannah and Bri. The one sent home is Savannah.