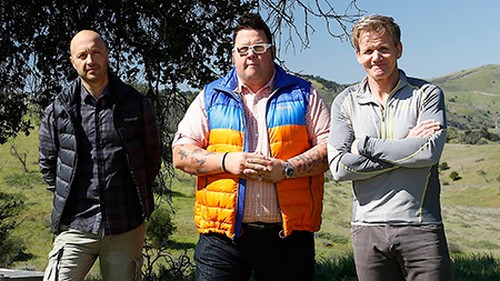 MASTERCHEF airs another 2-hour episode tonight on FOX with top “Top 8 Compete.” On tonight’s show, the remaining contestants compete in a “hunger games” challenge.. Did you watch last week’s episode? We did and we recapped it HERE for you.

On tonight’s show the “hunger games” takes on a new meaning when the home cooks are taken to a remote field where they will split into two teams and compete in MASTERCHEF’s first-ever overnight challenge. The contestants will have only a limited box of supplies to cook for sustenance, as well as an impressive lunch for the judges. The winning team is safe from elimination, while the losing team faces an intimidating spun sugar dessert pressure test. Find out who comes out on top in a challenge that will test the survival of the fittest.

The competitors have been taken outside to … the middle of nowhere. Their challenege is to make a gourmet meal out of their limited resources. That is after spending the night in the wilderness.

Bri and Natasha have been chosen as team captains. They pick their dream teams only for the judges to then switch the captains. That’s how Bri ended up on a team with Krissi. Yet their team is the one that comes up with a idea long before the Red team. Yet despite their early starter, its unclear whether the Blue team gave themselves enough to cook their rabbit.

The Red team were lucky enough to test cook their pigeon.

In the end the judges like both team meals. Even though the Blue team created pasta in the wilderness the winner is the Red Team. Their advantage from the challenge is choosing someone to save from the Blue Team. They chose Krissi. They know they call beat her.

The pressure test comes down between Jordan, Jessie, and Bri. They have to make six perfect éclairs. Jordan baked his last, Jessie doesn’t know how to fill her éclairs, and Bri didn’t fully cook her’s because of time.

Bri’s is in danger. No one likes her pastries. Their flat, soggy, and barely have any crème.

Jordan is safe. His are too sweet but they’re fully cooked and has a lot of crème.

Jessie is in danger. Her’s are flat and only have crème at the ends.

It comes down between Jessie and Bri  – and Bri is sent home!