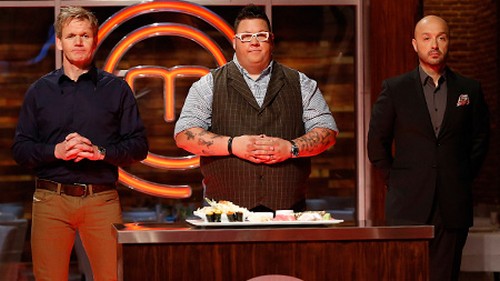 MASTERCHEF airs another 2-hour episode tonight on FOX with top “Top 7 Compete.” On tonight’s show, The home cooks complete a tag-team sushi challenge. Did you watch last week’s episode? We did and we recapped it HERE for you.

Last week the “hunger games” took on a new meaning when the home cooks are taken to a remote field where they will split into two teams and compete in MASTERCHEF’s first-ever overnight challenge. The contestants only have a limited box of supplies to cook for sustenance, as well as an impressive lunch for the judges. The winning team is safe from elimination, while the losing team faced an intimidating spun sugar dessert pressure test. Find out who came out on top in a challenge that tested the survival of the fittest.

On tonight’s show In the next mystery box challenge, the home cooks get a surprise visit and create a dish inspired by their loved ones. The home cook with the best dish will have an advantage in the elimination round and select the pairs of contestants who will compete in the tag-team sushi challenge. The teams will have one hour to recreate a plate of sushi with one cook preparing the dish at a time. The team with the least impressive sushi platter will face an emotional elimination.

It’s down to the last seven. The contestants walk into the kitchen and see a giant box. Some are fearful that past contestants have come back. Luckily it’s not past contestants but its loved ones. Everybody gets to hug and kiss family. All except Krissi. Her son couldn’t make it because of school testing.

However their family is part of the challenge. They have an hour to cook something inspired from home. Now all they have to do is try not to embarrass themselves in from of their family.

Natasha’s dish is a big hit. Jessie dish is just as good. Apparently having family makes everyone up their game. Lastly, finishing out the top 3 is Luca. His classic Italian dish does very well but who won?

The winner of the Family Mystery Box Challenge is Luca.
Luca’s advantage is that he get to decide the teams for the elimination challenge as well as being safe. He groups James with Jordan. He groups Natasha with Krissi. He groups Eddie and Jessie. The final straw in the contest is that they’ll be tag team cooking sushi.

Jessie and Eddie don’t know how to prepare sushi.

The constant switching is really starting to get to the contestants. Although Natasha’s team is strong, she doesn’t let Krissi do what she can instead Krissi has to do things she’s never done before.

Natasha and Krissi’s dish is good.

Jessie and Eddie’s dish is simply disgusting. So it is Jessie and Eddie that are up on the chopping block. Eddie is the one sent home. Why? Because he looked completely lost during the whole process.

Before he leaves Eddie says he believes Natasha will win the competition.
In next week’s surprise twist the final six won’t be cooking. Instead one of the finalist sent home has a chance to return and redeem himself.