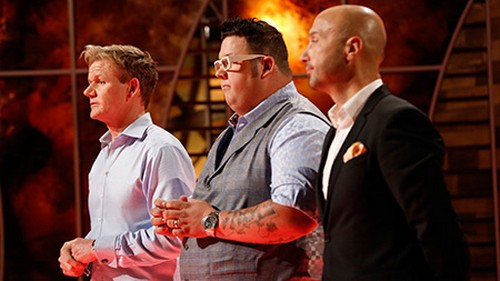 MASTERCHEF airs another 2-hour episode tonight on FOX with top “Top 7 Compete, 1 Returnee.” On tonight’s show contestants must prepare a perfect T-bone steak dish. Did you watch last week’s episode? We did and we recapped it HERE for you.

Last week eliminated contestants from this season were given the opportunity to cook their way back into the competition. In the first part of the challenge, the returning contestants had to prepare as many perfectly cooked fried eggs as possible, but only two contestants advanced to the next stage. Then, the remaining contestants had to prepare a perfect salmon dish that the judges and current contestants judged in a blind taste test. The contestant whose dish earned the most votes.  The three contestants that came back wereBri, Lin, and Bime.    Bri won the competition and she got her white apron back and she will be back to compete in the MasterChef kitchen.

On tonight’s show in the next mystery box challenge, the contestants must prepare a delicious and perfectly cooked T-bone steak dish. The home cook with the best dish earns immunity and assigns a different type of poultry to the remaining contestants in the elimination round. Later, pressure runs high as the competitors must cook the most important poultry dish and prove that they deserve to stay in the game. Find out which home cook flies the coop.

Tonight show begins with all seven competitors back to exactly where they were two weeks ago. All of that pride of being in the Top 6 is gone. The judges brought back former contestant, Bri Kozior just last week and we all know that decision won’t be sitting well with the six that thought they had already beat her. Maybe they’ll do better in a repeat.

To begin they were given their mystery box challenge: A 16 oz. t-bone steak from Walmart.

They each may cook the meat however they wish but instead of going the pantry they must get their groceries directly from the Walmart truck. Was it necessary to make the chefs run outside during the 45 minute allowed cooking time? No but advertisers sure found a way to sell their Walmart logo. Also the truck surprisingly had more versatility than the usual pantry. At least that’s what Krissie is saying.

She was able to find a lot more produce she was used to and that allowed her to get a little bit fancier than she usually would have. Then again this could be the result of having to deal with Bri, her arch nemesis, again. Which frankly shouldn’t trouble her at all. This mystery box challenge can be nothing but a set-up for Bri the vegetarian.

The first of the top three contestants are chosen. Jordan dish does go well Judge Jo. He found it rich and sweet. The other two other judges agree with him. He did a marvelous job on seasoning.

The second is Luca. He’s been on fire recently. Even the judges are saying he’s finally taking this competition seriously. The dish is very well done and he even cooked the steak in two ways.

The last of the top three is Krissie. That’s right Krissie. The one whose always cooking juvenile dishes. She did end up cooking a fancy steak. Although she admits she’s never been to any upscale place she managed a high quality steak.

Much to the frustration and honest confusion, Krissie won the Mystery Box Challenge. The first words out of her mouth is revenge; In other words not so good for Luca (he did try to knock her out). Once in the pantry she learns she won’t have to cook tonight but she will have to decide which live bird each contestant has to cook. The remaining contestants won’t know what will hit them until they enter the pantry.

Not only do they have to cook live avian creatures but someone let them loose so they have to catch their individual birds that have are each wearing faces of who will be cooking them. Talk about morbid. They are freaked and worried about killing their creatures. Yet Bri say she will feel bad and then let’s be known she’s not afraid to kill the pigeon. Didn’t expect that from a vegetarian.

Still they’re safe from animal cruelty. They won’t be cooking live birds but the already dead and prepackaged kind.

Nonetheless Krissie put a lot of thought to knocking off contestants and she chose very wisely. For instance she gave the hardest bird, the pheasant, to Natasha. Now Natasha has never been in the bottom three and the judges have her already primed for that position.

As soon as the contestants get cooking, the judges revise their opinions. Giving her best imitation of laughing like a cackling witch, Krissie is watching her plan at work. As she said she set off three missiles; one for Natasha, one for Luca, and one for Jordan. If anything she’s most likely to knock out Jordan because like she predicted he did overreach his abilities.

One of her unintended target Jessie played it too safe with her chicken. None of the judges are pleased and Chef Ramsay found raw vegetables. Messing up chicken of all things has severely limited her chances of escaping the bottom three. She better hope that there are dishes worse than her own.

No such luck with Natasha. Despite having the hardest bird she cooked her whole dish superbly. The judges will probably be her biggest champions from now on.

Likewise Luca rose above Krissie expectations. His dish is delicious. Italians may not have Thanksgiving but he has eaten turkey here in America.

The only bomb that worked was Jordan. His food looks disgusting and the tastes exactly how it looks. Even though he did not how to cook quail he basically ignore doing anything with the meat for the first 40 minutes. It’s safe to say Jessie has company at the bottom.

Both James and Bri did very well with their meat, equally receiving top compliments so who will be joining Jessie and Jordan? Not Bri because she came in second thus becoming a team captain for next week and the ultimate winner is Natasha.

The bottom three turns out to be only the bottom two. Of course Jessie and Jordan are those two. Who leaves and who stays? Jessie’s only fault was playing it safe and that’s why she gets to stay. Jordan has to go home but before he does he’s asked who he think will win. He votes for Natasha. He explains that she’s a bitch but a bitch that can back it up in the kitchen.