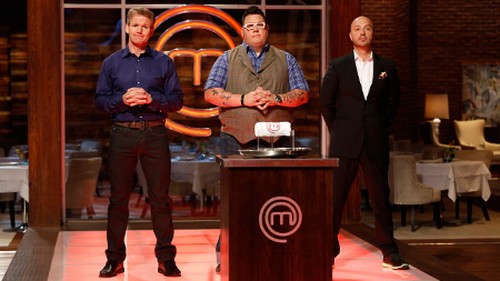 MASTERCHEF airs another 2-hour episode tonight on FOX with top “Top 6 Compete.” On tonight’s show, contestants that were ousted earlier in the season get a chance to earn their spot back.. Did you watch last week’s episode? We did and we recapped it HERE for you.

Last week in the next mystery box challenge, the home cooks got a surprise visit and created a dish inspired by their loved ones. The home cook with the best dish had an advantage in the elimination round and selected the pairs of contestants who would compete in the tag-team sushi challenge. The teams had one hour to recreate a plate of sushi with one cook preparing the dish at a time. The team with the least impressive sushi platter faced an emotional elimination.

On tonight’s show eliminated contestants from this season are given the opportunity to cook their way back into the competition. In the first part of the challenge, the returning contestants must prepare as many perfectly cooked fried eggs as possible, but only two contestants will advance to the next stage. Then, the remaining contestants must prepare a perfect salmon dish that the judges and current contestants will judge in a blind taste test. The contestant whose dish earns the most votes The top six are glad to know that they won’t be cooking. That is until they realize that someone has to cook. Bri, Lin, and Bime are back. Only one of them can win back their chance for the white apron. Who will it be?

The show opens with us finding out that one previous eliminated contestant will be coming back.  The three contestants competing for a spot back in the MasterChef kitchen are Bime Cruz, Lynn Chyi and Bri Kozior.

Their first challenge is to cook whatever is in the MasterChef pantry. Whoever comes in last gets immediately disqualified from the competition and the remaining two home cooks will compete in a final challenge.  When the contestants run into the pantry they find if is filled with eggs, eggs and more eggs.   Not sure what is up the three contestants grab up as many eggs as they can.

When they get back the judges Gordon Ramsay, Joe Bastianich and Graham Elliot tell them the test is to cook as many of perfectly sunny up eggs as they can.  The contestants cook many eggs but we soon find out not all the eggs they cooked were the perfect sunny side up.  Some were over cooked, some too raw etc. etc.  Many eggs went in the garbage.  To make it dramatic the judges broke the plates the eggs were on as they threw them out.

Here is how the three contestants did:

Lynn cooked 27 eggs. Only 8 are perfect.

Bri cooked 13 perfect eggs. She easily beats Lynn and she is headed to the second phase of the contest.

Bime cooked 32 eggs and 9 turned out to be perfect. He beat out Lynn, too bad I would have liked to see him come back.

Round Two we have Bri and Bime competing and it involves going into the MasterChef restaurant.  Bime and Bri have to cook “the greatest salmon” in the world as well as two sides: potato; asparagus and a hollandaise sauce.  Not only do they have to cook the samon, sides and sauce – they have to prepare seven servings.  They have to do all this in a measly house.

Bri and Bime will be judged by the six remaining contestants in this second challenge and it’s a blind tasting. That means the contestants don’t get to find out which of the two Bri or Bime’s dishes they are tasting.

The salmons that Bri and Bime have to cook are huge and they get started on the filleting.  Bime seems to know what he is doing, but Bri cuts the salmon like she is cutting caked.  The remaining six contestants are hoping Bime wins, they don’t feel he is any competition.

Now it is time for the testing of the dishes.  The judges felt Bri cooked her fish the best but she didn’t put enough hollandaise sauce and her potatoes were kind of bland meanwhile everything on Bime’s plate was great except his fish. Their food gets judged and I think it is pretty close.  They go to vote.

Joe Bastianich takes the envelopes out with the votes.  The first contestant who gets 4 votes is back in the game.  By the time he took out 6 of the votes it was tied.  Finally he took out the seventh vote and it was for Bri.  Bri won the competition and she gets her white apron back and she is back to compete in the MasterChef kitchen next week.