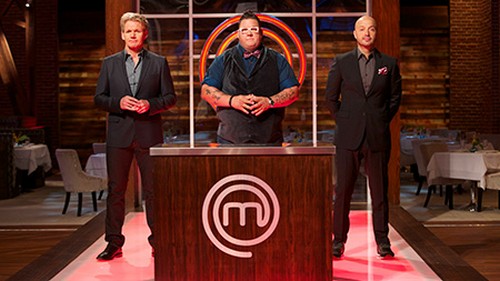 MASTERCHEF airs another 2-hour episode tonight on FOX with top “Top 4 Compete/Top 3 Compete.” On tonight’s show The judges’ kids help judge the mystery box challenge.  Did you watch last week’s episode? We did and we recapped it HERE for you.

On last night’s show the final four cooks will split into two teams in the next mystery box challenge, and they will prepare a three-course meal using notable ingredients from all over the United States. The winning team will be safe from elimination, while the members of the losing team will go head-to-head in a chocolate desserts pressure test that will end the competition for one home cook. Later, the judges challenge the remaining three contestants to cook with the same ingredients they used in their initial auditions, while creating an elevated and sophisticated version of the same dish. The home cooks must demonstrate how far they’ve come in the competition in order to earn a spot in the finale and move one step closer to winning a life-changing grand prize.

On tonight’s show the judges got some very special help from their sons, who stopped by the MASTERCHEF kitchen to judge the next mystery box challenge. Then, the contestants faced the daunting task of recreating one of the greatest dishes the judges ever tasted. Later, in a field challenge, the remaining five home cooks visited a ranch where they each prepared one Southern-inspired dish as part of a special summer luncheon for local charity volunteers. After the first part of the competition, two home cooks advanced to the finals and the Top Four, while the bottom three contestants faced a pressure test that will end the competition for one home cook.

Tonight on MasterChef the top four were given what could have been a dream come true. The judges laid out the ultimate mystery box challenge. On any other day the contestants would assume someone was under there( that’s how big it is) but when it comes to the Top 4 they found out that everything they could ever want was in the box. It holds nothing but the best of any and all cooking material

However there is a downside. They won’t be cooking on their own. They have to cook in teams of two and because Luca got first pick, he created the ultimate team with Natasha. Leaving poor Jessie to find her way with Krissi. Anyone could see it on her face that she feels like her team is going to lose. Why? Because she knows Krissi isn’t a team player.

The two teams are given 60 minutes to cook a three course restaurant quality meal. If they pull it off they can enter the Top 3 and the losing team will face each other in a pressure test.

Krissi could have proven her wrong but chose instead to reinforce her reputation. She let Jessie practically run the show up to a point. The two women’s food is coming along much better than the “A” team yet the judges notice how the two girls aren’t communicating so well. Krissi doesn’t know what Jessie is doing some of the time and when it’s her turn to cook the dessert, she fails to cook the crust of the tart and then fails to the crepe.

Jessie said cook whatever you can. Krissi took this as an insult and before she could lose her temper she walked off. It wasn’t a couple of seconds. It actually was more than a couple of minutes. Then when she felt ready Krissi returned and smashed a few dishes and cooked a dessert.

When it came time to judge the dishes, the Blue Team’s ( Natasha and Luca) dishes fell short of being really great. Although Natasha’s dessert was what could cause them to lose. While the Red Team’s (Jessie and Krissi) dishes were good. The dish Krissi had started out on was redid by Jessie and so made two dishes to Krissi’s one. Both of their food was good and only a little short of being great. But one of things Chef Ramsey noticed and called Krissi out for is that she allows other people to run the show and the first opportunity throws them under the bus. It was her that quit today. Jessie stayed and finished the food.

Overall the Red Team could have won but the judges gave it to the Red Team. They at least worked together. Now it will be down to Jessie and Krissi in the Pressure Test. Before they get there though Krissi might just very well kill her competitor. She overhears the other three contestants talking about her and Krissi, never one to let anything go, wants blood.

The day of the Pressue Test dawns. The two women are warned it will be the most difficult Pressure Test they will ever have. They have to cook each of the judges’ favorite chocolate dish. They’re given 75 minutes to cook Soufflé, Molten Lava cake, and a Chocolate Mousse.

Krissi pulled her soufflé out a little bit too early even though she swears it’s done. When it came time to judging the soufflé, it was found undercooked. Her Mousse did beat out Jessie leaving them neck and neck in the competition.

The final dish was the Molten Lava Cake. Neither woman pulled it off flawlessly but Jessie was just a little bit better and so she ends up in the Top 3. It’s Krissi’s turn to leave and just before she does, she’s asked the question. Who Will MasterChef? She says Luca. He has to do it for the Italians.

In Part II of tonight’s episode it’s the Top 3. The contestants come in to find each of the judges have a mystery box in front of them. In all three it’s what they’ll win if they win the whole competition. A quarter of a million dollars, their very own cook book, and the MasterChef Trophy.

When it comes time to open their own mystery boxes they find they each have different ingredients. It seems they won’t be cooking the same thing as each other. They have to redo the dish that won their place in MasterChef but it can’t be a replica. They have to elevate their dishes or in Luca’s case make his dish much better than last time.

Just one little problem with that. Luca had the same problem with his sauce. It still tastes weird. Can Luca pull it off in time? Or will it have to scrap it?

The time comes to taste the dishes. Luca dish does look much better and the taste is overall an improvement but the sauce. He didn’t know how to cook a cheese sauce and yet that never stopped him from trying to make it.

Both Natasha and Jessie’s dishes are more restaurant quality than what they originally created and they don’t have a single criticism against them. They’re dishes instantly move into the top two. Thereby Luca’s dish is the ultimately loser. Jessie’s dish may have won first place but she has to cook in the elimination test along with the others. Her only privilege is that she get to choose first what she’ll cook with. The options are Kobe beef, Cheese, and King Crab.

Jessie decided on the beef. She’s never cooked with it before but she believes it will be easy. She wants Natasha to pick the cheese. She knows Luca has had trouble in the past with the crab. Natasha on the other hand has to pick what she’ll best work with. She had no other choice than to pick crab.

Each of their dishes are ambitious. Natasha is making a cold dish of noodles, Luca is creating a traditional Italian dish, and Jessie has never cooked Kobe beef. As a matter of fact she runs out of butter and needs to borrow some from others. She went to Natasha who had three stick of unopened butter only to get rejected. Luca save her meal by giving her what was necessary. Unfortunately he may come to regret that.
His dish was good and not great. So close yet so far away. Natasha’s dish is absolutely scrumptious. It really comes down to whether Jessie’s dish is better than Luca. She had started out on a salad but changed her mind at the last minute. Her dish is great. However they want to taste the salad she started. Once they do they realize they love the salad more than noodles she put on the plate.

It’s Natasha that gets picked for semi-finals. With only two people left only one can be chosen. The person joining Natasha is Luca. He used more unseen techniques and his dish was close. It stopped short on presentation.

Jessie created a great variety of dishes on the show and hopefully she can become an even better cook than she was prior.