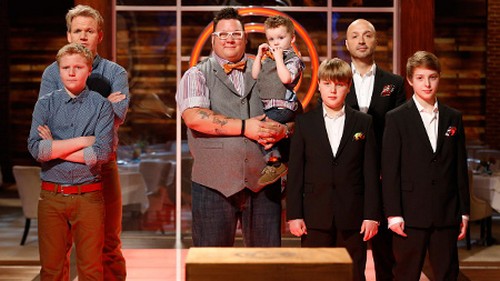 MASTERCHEF airs another 2-hour episode tonight on FOX with top “Top 5 Compete.” On tonight’s show The judges’ kids help judge the mystery box challenge.  Did you watch last week’s episode? We did and we recapped it HERE for you.

On last week’s show in the next team challenge, home cooks took over WP24, a fine-dining, downtown Los Angeles restaurant, and were tasked to re-create some of the restaurant’s most popular dishes, including appetizers and entrees. With limited time to prep, cook and serve a discerning group of diners, the pressure was on in the kitchen, and the judges and the diners had a tough decision to determine the winning team. Later, the losing team faced elimination in another heated pressure test, where the remaining contestants had to execute a perfect plate of fried calamari with a side of marinara sauce.   At elimination Bri was sent home.

On tonight’s show The judges get some very special help from their sons, who stop by the MASTERCHEF kitchen to judge the next mystery box challenge. Then, the contestants face the daunting task of recreating one of the greatest dishes the judges ever tasted. Later, in a field challenge, the remaining five home cooks visit a ranch where they will each prepare one Southern-inspired dish as part of a special summer luncheon for local charity volunteers. After the first part of the competition, two home cooks will advance to the finals and the Top Four, while the bottom three contestants will face a pressure test that will end the competition for one home cook.

In Part I of tonight’s show the contestants get to meet the judges’ sons. It was their sons that filled out tonight’s mystery box challenge. Whoever wins will have an advantage in the later challenge tonight.

The kids have picked out a varied sort of ingredients. No one really knows how they’ll go together but it’s up to the contestants to figure it out. They have to cook a restaurant quality dish proving they could cook with anything. As the judges say it takes them out of their comfort zone and proves if they’re up to winning MasterChef.
In the meantime the kids check over what contestants are doing. With Ramsay’s Jack throwing in some flirting. He’s thirteen but he likes to flirt and his father could tell and can’t help laughing at.

Several contestants look like they have the whole thing in the bag but Natasha for some odd reason has decided to play it too safe. She cooked pancakes. There’s nothing wrong with pancakes but it’s not really restaurant quality much less up to her usual standards.

The kids leave prior to the actual tasting. They can’t stay up past their curfew. Once they’ve left, the judges picked out the top three. The first person to be called is Luca. His dish is delicious and visually appealing. The next person called is Jessie. Her dish is good but not as praise worthy as Luca’s. The last person to be called is James. He did really well with his pastry yet Krissie is angry. She felt he used premade puff pastry while she cooked hers is at least fresh. She feels both insulted and cheated.
For the first time ever James won the mystery box challenge. His advantages are not cooking and picking who will cook what.

Natasha’s Vietnamese soup had some cooking hiccups. Her broth turned out to be too sweet. The rest of the dish is fine. It’s just the sweetness. The judges applaud her effort. Effort only not the full dish.

Luca’s soup is perfect. He beats out Natasha cooking the same dish. He’s been on fire recently and that appears to not be slowing down. All the judges that once doubted him now love him.

Jessie’s soup has depth and layer which makes no sense to everyone that doesn’t cook. The only negative feedback is from Chef Ramsay. He says she didn’t cut back on the sourness. Otherwise a really good dish.

Krissie, the resident hater of Asian food, did pull off a good job. Like Natasha her dish is considered a good effort. Chef Ramsay tells her the biggest problem in her cooking is her. She tends to hold herself back and become her own worst enemy.

The winner of the challenge is Luca with Jessie making a very close second. The bottom two came down between Natasha and Krissie. In the end the judge decides to save Krissie. With tears streaming down her face Natasha thought she would be going home only to be surprised by the judges. They couldn’t decide who put out the weakest dish and so instead decided to send no one home.

All of the troubles from Part I literally means nothing. They cooked and no one was eliminated. Hopefully Part II will not be a repeat of the same things.

On tonight’s Part II of the obviously prerecorded episode the five remaining contestants were brought out to a farm not far from the city. There they will have to individually, no more group challenges, cook the requested meat for Paula Dean’s thank you luncheon. They have to cook 5 different proteins for the selected charity volunteers Paula wishes to recognize for their outstanding work.

Seeing as Luca won last week he has the advantage of choosing his products along with everyone else’s. Luca will cook the pork chops. Jessie will cook alligator. She’s never even see alligator meat. So that’s another advantage for Luca. James got chicken. The easiest meat. While Krissie got shrimp. She probably thinks it will be easy but Luca most likely chose shrimp because of how she reacted last week during the restaurant test. Her shrimp at the time was constantly raw. And lastly Natasha got catfish.

Surprisingly James struggled with his dish. His pieces of chicken were bigger than he was used to and so he didn’t cook it all the way through. Natasha also struggled with her catfish. She hadn’t expected it to stick to the grill and at the last minute she had to abruptly cook it in pans.

When it comes time to serve their tables everyone is getting rave reviews except James. His meat was still raw. Chef Ramsey had to take several dishes back from James table just so the meat can be cooked fully through this time.

Another table got their food sent back. Natasha for the first time hasn’t been able to pull a rabbit out of her hat. Her fish for the majority was undercooked. She could very well find herself in a pressure test as a result.

Without further ado, Paula announces the top two contestants for tonight’s challenge. The winners are Luca and Jessie. His large piece of pork chop was moist and the dish an overall delight. Then there’s Jessie’s dish which was appropriately dedicated to her home state of Georgia. She didn’t know what alligator taste or looked like and yet she cooked it perfectly. As a reward the two winners are both asked into the pantry. They have to decide together which contestant will cook one of the judges very own dishes straight from their own restaurant.

The two agree their main rival, Natasha, should go down. They give her Ramsey’s dish. However even though they weren’t targeting the other two, their choices for them prove to be equally as hard. There is no easy win as of yet. What Luca and Jessie do have is James making bigger blunders than Natasha thus ruining their plans.

Time is called and visually Natasha’s dish isn’t as perfect as Ramsay’s but her food is good. She captured the taste at least. On the other hand Krissie dish looks exactly like Judge Joe’s dish but her food isn’t up to their standards. She overcooked her steak on one side and the other was a little bit too raw. James’s dish tasted delicious, Ramsay couldn’t help getting seconds and thirds, but it’s not what Graham’s dish looked like. As a matter of fact James might have made another dish entirely.

After a long deliberation the judges chose to send James home. A last word of advice don’t fall back on taste alone. Before James leave he says Luca will win the competition.