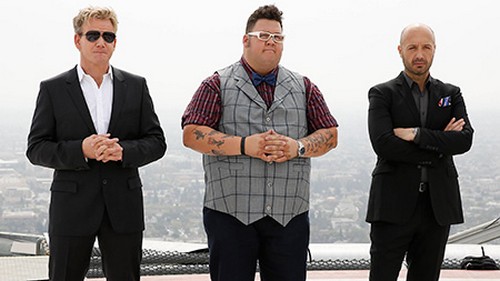 MASTERCHEF airs another 2-hour episode tonight on FOX with top “Top 6 Compete Again.” On tonight’s show contestants take over a fine-dining Los Angeles restaurant. Did you watch last week’s episode? We did and we recapped it HERE for you.

On last week’s show in the next mystery box challenge, the contestants had to prepare a delicious and perfectly cooked T-bone steak dish. The home cook with the best dish earned immunity and assigned a different type of poultry to the remaining contestants in the elimination round. Later, pressure ran high as the competitors had to cook the most important poultry dish and prove that they deserved to stay in the game.

On tonight’s show In the next team challenge, home cooks take over WP24, a fine-dining, downtown Los Angeles restaurant, and are tasked to re-create some of the restaurant’s most popular dishes, including appetizers and entrees. With limited time to prep, cook and serve a discerning group of diners, the pressure is on in the kitchen, and the judges and the diners have a tough decision to determine the winning team. Later, the losing team faces elimination in another heated pressure test, where the remaining contestants must execute a perfect plate of fried calamari with a side of marinara sauce. Find out which contestant is sent home after another emotional elimination.

Starting off tonight’s episode as if they were in a movie the judges arrive to greet the contestants on a helipad. Even the helicopter they arrived on was monogramed. However they aren’t enough contestants awaiting the judges as there should be. Krissie couldn’t make it to the roof. She has severe fear of heights.
Do to this Krissie was unable to hear the challenged. The team challenge for tonight is a restaurant takeover. The teams have taken over WP 40 restaurant. An Asian fusion restaurant. Oh no…

The Red Team lead by Natasha also has Jessie and Luca meanwhile the Blue Team lead by Bri has James and Krissie. With such teams the automatic thought would be that Red Team would dominate without a problem. As James said he’s on a team with a vegetarian and a woman that hates Asian food. It’s highly unlikely their team would win.

Before they begin cooking they were given a quick tutorial by one of Wolfgang Puck’s chefs. He showed them how to cook all the meal for the night but he mostly cooked in woks. Something that frightens Bri.

The moment they begin cooking all assumptions are gone. The Blue Team lead with their appetizers. They had everything coming out in a timely manner. It was the Red Team that showed initial failure. Luca especially was having problems cooking his station. At one point a diner sent her food back because the scallop was raw. But they were able to turn things around after Natasha took over his station.

When it came to entrees though the Blue team suffered. Krissie has no idea what she’s doing with the shrimp and Bri hasn’t come into help or takeover. While all this happening Blue Diners are walking out. Bri isn’t doing anything. Graham luckily steps in and shows Krissie some true leadership.

Both teams had ups and downs. Deciding the overall winner is going to be hard. The judges had to postpone their final decision until tomorrow. Maybe that’s why they gave the contestants champagne. It was a consolation prize.

The next day the winner is revealed and like every time before Krissie is not on the winning team. The Red Team won the team challenge. Now all that’s left is the pressure test. Tonight’s pressure test is cooking calamari. They’re given fresh squid they have to cut and clean themselves.

Tonight all three Blue Team members have to cook. Bri was aked who should be save because they performed the best and she said herself. This obviously angered foul mouthed Krissie who claimed that was a lie. Now that all three are cooking the judges are weighing in. Krissie has the great advantage of making marinara sauce and yet she’s cooking angry. Really angry!!! Hearing some comments from the gallery she begins cursing and throwing things at the Red Team. She managed to stun the judges.

Graham goes over to talk her. In a way he tries to get her to focus on the cooking. Whether that will her help her in the end is really just up there.

Bri’s dish is first. She had never tasted the calamari. If she did she would have put less flour. The flour burned the outside faster than cooking the inside. Her food is raw and she added lemon juice to her tomato sauce. The worst thing she could have done.

Krissie dish looks like onion rings. The calamari nice and skinny tasted like funnel cake. None of the judges thought it was up to snuff. But she thinks she’s still ok as long as her food didn’t get spit out like Bri’s.

James has one of the best calamari. Still his dish isn’t perfect. He completely forgot about the marinara to the last second.

At this moment the judges are curious about sending them all home. But they don’t. James is the first person chosen to be safe. It’s down to Krissie and Bri. The judges chose Krissie much to the aggravation of everyone else.