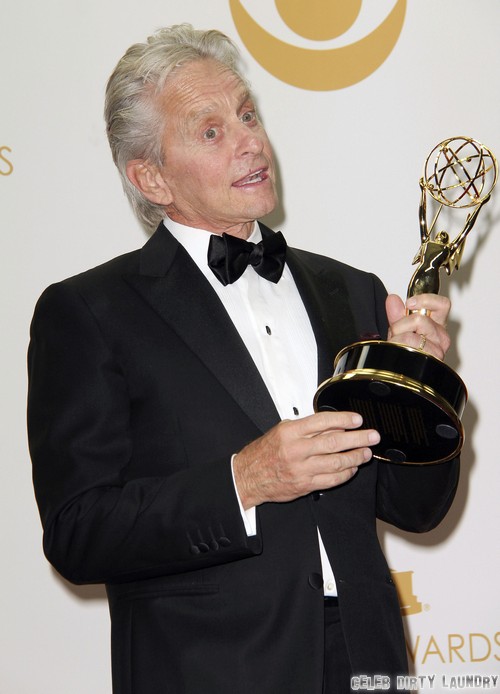 Last night was likely a sweet victory for Michael Douglas as he snagged his very first Emmy for best actor as Liberace in Behind the Cabalabra. It was Michael’s first role after beating Stage 4 throat cancer and it was also the job that took him away from his family for long hours. He and wife, Catherine Zeta-Jones have admitted that they are taking a break from their relationship and according to insiders, the actress felt left in the dust when Michael went back to work. Catherine had dropped everything to care for her sick husband and when he finally was well she felt he abandoned her in favor of work. That caused major resentment, meanwhile Michael seems to have some of his own.

He has managed to handle Catherine’s bipolar disorder and manic episodes but he just can’t tolerate her drinking. Apparently Catherine drinks when upset and it triggers manic episodes so while Michael understands that she can’t control her mental illness, she certainly doesn’t need to do things to trigger it. In recent weeks we have seen Michael vacationing and hitting red carpet events alone, appearing to be in a pretty decent mood while the only sightings of Catherine have caused concern. She looks extremely frail, her hair appears to be falling out and the once stunning actress always has a cigarette in hand.

After a few months of scandalous headlines Michael now claims that he and his wife are speaking again and that he has hope that things will be okay. Mike told ET at the Emmys, “Everybody is fine. Nothing really more to say. We were just taking a little break. We’re talking. I think everything will be fine and I’m very hopeful.“

No word on Catherine’s state of mind but it’s pretty clear that there is a stalemate of some kind and one of them is unsure about reconciliation otherwise it would have already happened. Do you think they’ll be able to fix their marriage or is it already over? Tell us your thoughts in the comments below!