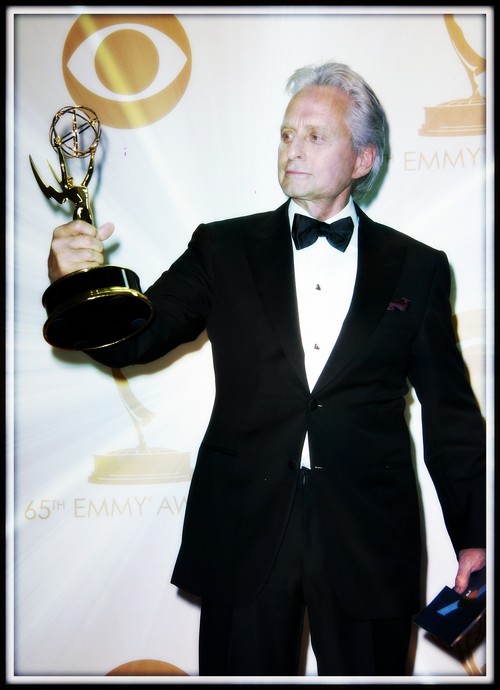 Catherine Zeta-Jones‘ marriage to Michael Douglas has been hanging on by a thread.  Catherine is said to want a reconciliation with her hubs Michael but that looks like it is not in the cards.  Catherine is still wearing her wedding ring but Michael has been partying like it’s 1999.

The veteran actor recently won an Emmy Award for his portrayal of Liberace in Behind The Candelabra.  Michael walked the red carpet solo and attended the award show alone, Catherine was in China at the time.  Wanted to show Michael how much she cared she told reporters, “I’m thrilled for him. It was wonderful – so well-deserved.”

But Catherine’s kind words fell on deaf ears and since the win Michael has been so thrilled he has allegedly been partying up a storm and enjoying the single life.  But Michael better be careful and not cheat on his wifey. Catherine is said to be devastated by the split and wants her hubs back.  Add to this Catherine is rumored to have an infidelity clause in her prenup with Michael and she stands to pocket several million if Michael is unfaithful.  You know what they say about a women scorned.  Watch out Michael…..

To cope with her dissolving marriage to Michael Douglas, Catherine Zeta-Jones has indulged in a half million dollars of retail therapy!  Catherine has picked up an $80,000 Franck Muller diamond watch, $300,000 worth of clothes, various bling and a new Tesla.  “Catherine has always loved the finer things, but she’s spending like never before,” says a friend.  “They have joint accounts, but Michael doesn’t care what she spends.”  Star has heard that Michael is too busy enjoying the single life to obsess over his bank balance.. at least for now.

What do you think CDLers can Michael and Catherine ever find their way back to each other?  Or is this just another May/December romance that has fizzled?  Hit the comments and let us know your thoughts!