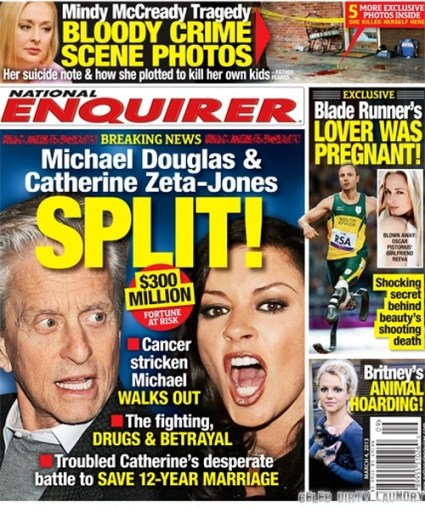 Michael Douglas and Catherine Zeta-Jones are featured on the front cover of the latest issue of the National Enquirer. According to the tabloid, the long-time couple are finally calling it quits!

The couple have been married since November 18, 2000 — but the tabloid insists that Michael has officially walked out on Catherine. What a shame if that’s true — they’ve been together for forever by Hollywood’s standards. She has stuck by him through his son’s incarceration and his cancer scare — it would be a total shame if they really do end up going their separate ways.

The magazine details how the cancer-stricken star has walked out on Catherine. The cover also reveals that there were fights about drugs and betrayal. Lastly, Catherine was in a desperate battle to save her marriage to Michael. Poor thing, they were so strong together. Let’s hope that these are just rumors and Michael and Catherine have not walked out on each other at all.

What do you think of the rumors? Hit the comments and let us know your thoughts!