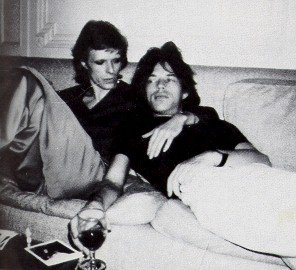 David Bowie was once the go-to guy for everything awesome. His generation-defining music made him a musical force to be reckoned with and forced him to stick to the charts like a dead fly with superglue pinned to its feet. Bowie was popular, controversial, and iconic. However, during a recent, exclusive interview, Angie Bowie (David’s ex-wife) painted a jarring portrait of his legacy. A

She exclusively told The Sun, “.My assistant was laughing in the kitchen when I got home. She said, ‘You won’t believe this. David and Mick Jagger.’ I said, ‘Right then, put the kettle on’. I went upstairs and banged on the door and said, ‘Morning! Ready for breakfast, boys?’ I said: ‘Did you guys have a good night?’. They were so hungover they could hardly speak. I took pity on them.“

“It was a bulls**t romance. When he asked me to marry him, he said: ‘And I don’t love you, by the way. I watched David f**k everything that moves. In the first six weeks I knew him I met 14 people he’d slept with. He had told me before we married he didn’t love me, so of course he was not going to be faithful. As it was the 60’s, I suppose they called it free love.”

On the 11th of March, 2013, Bowie will be releasing his comeback album in the United Kingdom, but after these revelations and the accentuation of his legacy, his return to the music biz might just be covered in PR stardust.

What do you think? Do you think Bowie had a short lived affair with Jagger? Are you a fan of Bowie? Will you be buying his album? Let us know your thoughts in the comments below.