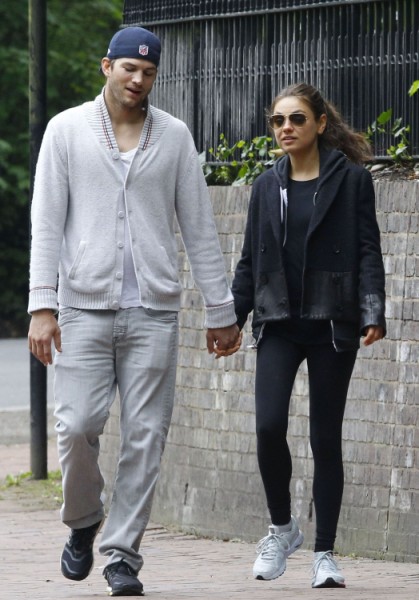 Mila Kunis and Ashton Kutcher are still hanging in London where Mila is filming her new movie. Ashton, as far as I can tell, is still doing nothing other than following her around and trying to find a way to get Demi Moore off his back as cheaply as possible. Oh wait! He’s hanging with royalty. You can’t forget about that!

When I first saw pics of Mila and Ashton hanging with Princess Beatrice and her boyfriend, Dave Clark, at a pub crawl several weeks ago I thought nothing of it. It was a charity thing and B is known for being a star-f-cker. Of all the royal grandchildren she’s the most likely to go to premieres and party with celebrities on the side. She loves having high profile entertainment friends and they probably love her because she’ll tell them things about Kate Middleton. ANYWAY, so I thought this relationship was a one and done kind of a deal. Guess not.

The couples are currently vacationing in St. Tropez. Apparently Ashton and Dave became friendly last year after Ashton booked  a space flight on Virgin Galactic. Dave works in astronaut relations for the company. So now Mila hangs with princesses. Do you think they ask about Kate and William? How could you not? I wonder how long you have to wait before you feel comfortable enough to ask? I would wait until the second or third time out and then I wouldn’t be able to help myself – especially if I was drinking. Lucky bitches.

So with all this royal time the Daily Star is running a story that has a Mila Kunis/Ashton Kutcher English wedding in the works. The couple have fallen in love with the country and are considering their locale options – Stonehenge being one of them. For f-ck’s sake! Stonehenge! I can see it! I can see Ashton getting married under the stars by Stonehenge. It’s just douchey and try enough. What a worldly guy! What do you think the Queen would say if Beatrice attended an American wedding at Stonehenge? I could see some lips pursing. Definitely lips would be pursed. But she’d be invited for sure. They’re besties now! Ashton rolls with royals. Who do you think would be more annoyed over the Princess Beatrice invite – the Queen or Demi Moore? That’s a tough, tough question.