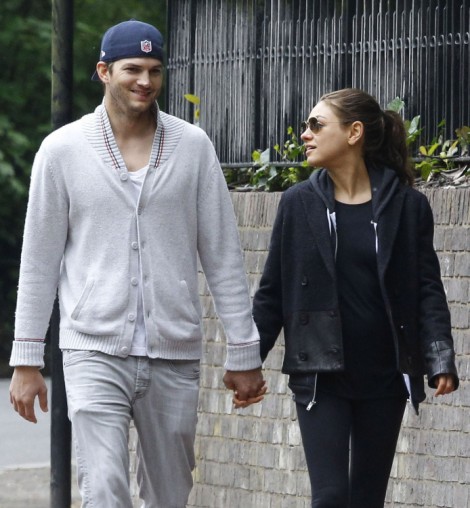 While in London Ashton Kutcher has been doing some very important schmoozing  It hasn’t been for roles (because I’m not even sure he acts anymore) but for Mila Kunis’ parents. Ashton Kutcher was just introduced over dinner and things must have gone well because below are pics of the couple out holding hands the morning after without a care in the world. God, they would make such a cute couple if Ashton wasn’t 50% of it.

I’m getting some major Loyd Dobler vibes here. Stick with me on this one. One of the best scenes in Say Anything is when Lloyd tells Diana Court’s dad: “What I really want to do with my life – what I want to do for a living – is I want to be with your daughter. I’m good at it.” Whose heart didn’t melt when they heard that for the first time? Did I just ruin the movie for you? Somehow it’s not as hot picturing Ashton say it. Did Ashton give that speech to Mila’s dad? Because he’s hanging in London just as Mila’s plus one at the moment. He has no acting projects lined up. He just finished Jobs but it’s supposed to be terrible.  I know he’s got his businesses on the side because he’s some kind of entrepreneur but… I’m just saying… Mila’s the star in that relationship. Will Ashton be able to handle that?

He’s handling it for now and things still look uber serious. I’m sensing wedding. I’m sensing babies. The minute Demi Moore gets her money she’s going to cut him loose and I have feeling a wedding won’t be far off from that. No one’s getting any younger – maybe Demi is! Have you seen her body lately? Sick.

What about you? Is Ashton meeting the parents a sign that he and Mila have serious intentions?