Mila Kunis To Give Up Career For Ashton Kutcher And Baby 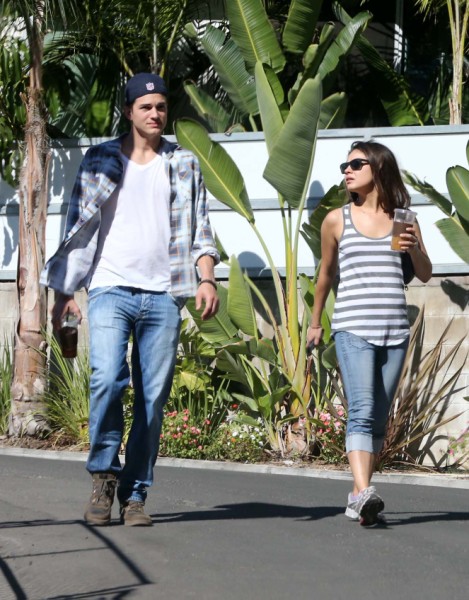 I’ve said it before. Mila Kunis is level-headed. She speaks with authority and confidence but manages to not appear up her own ass. It’s refreshing and her interviews are always good reads. And this is why I can’t understand the Ashton Kutcher relationship. How can a woman so cool and so poised go for that? It just doesn’t make sense! I’m almost over it. I truly am.
Moving on.

In the newest Playboy magazine, Mila Kunis promotes Oz: The Great and Powerful and doesn’t necessary explain her love for Ashton or shout it from the rooftops but she does say that when motherhood finally calls it’s going to take her right out of the Hollywood game.

“The truth is I don’t think I can do this for the rest of my life? I also want a life. I want a family?, like, one day, not tomorrow,” she told the mag. “I want to be a present mom. When I was growing up both my mom and dad worked full-time in one location. I’m never in the same place for more than two months. How am I ever going to have a family like that? You have to make compromises. If that means I do one movie a year, if people still want to see me and hire me and I don’t suck by that point, great. My only source of happiness can’t be dependent on something so fickle.”

But will Mila be the next Jennifer Garner including the stained jeans and flannel shirts? Can you see Mila smiling happily from the sidelines as Ashton accepts his Oscar? Good Lord, I hope not. Will Mila be the Drew Barrymore type and quit Hollywood to start a make-up and wine line or will she be more like Gwyneth Paltrow and throw her amazing lifestyle in our faces? Being a mom in Hollywood is just as much of a moneymaker these days as actually acting but I can’t see Mila being that girl. She could follow in Natalie Portman’s footsteps and act when a project feels right and then get out of town until an opportunity comes around again. It doesn’t seem like Mila needs the attention, right? It’s like she can take it or leave it. Again, that’s why I don’t get the Ashton Kutcher thing! He seems the exact opposite and I don’t care what people say about opposites and all that attracting.

Do you agree with Mila Kunis’ baby decision? Is it right for Hollywood to take a backseat once she starts a family? It feels like that might happen sooner rather than later. I don’t know about Mila but I’m not ready for that yet!