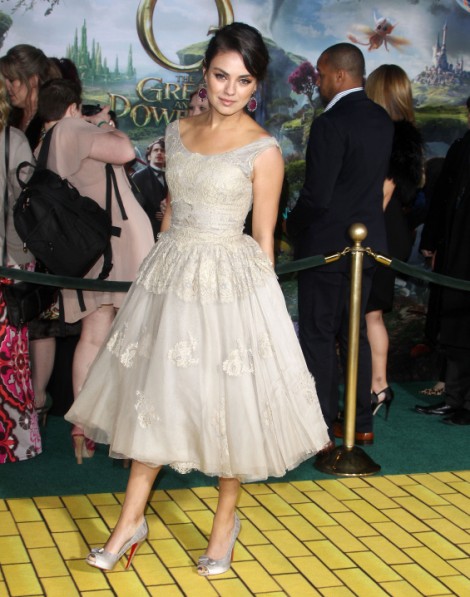 Well it looks like Mila Kunis couldn’t quite help herself from talking about boyfriend, Ashton Kutcher, in that Allure magazine interview after all. To be fair, she didn’t necessarily say his name, but it’s pretty hard not to miss who might be on her mind.

When asked about dating Ashton after years of working together and maintaining a friendship she reportedly said, “People change. So who you knew years ago is not necessarily the person that you [know now].”

Is that the closest we’re going to get to Mila explaining the Ashton situation? I gotta tell you. I need more explaining but, for now, I appreciate her effort. Lord knows this was probably hard for her. Her embargo against Ashton Kutcher-talking must be weakening because she was super cute on The Ellen Degeneres Show when she told the host she probably last talked to Ashton minutes before joining her on stage. Then we had the front and center Laker game appearance. It seems Mila’s ready to be out and proud.

This wouldn’t have anything to do with the Ashton Kutcher cheating rumors would it? Star magazine has a story out this week courtesy of Sara Leal, the waitress who reportedly helped end his marriage and humiliate Demi Moore back in 2011. Leal told the magazine that a pic of Ashton in his pajamas was sent to one of her co-workers over Christmas. This new woman who sent the pic claims to have been hooking up with the actor behind Mila’s back. The story was denied  by people close to Ashton’s camp. Sounds lame and tabloidy to me. Who would cheat on Mila Kunis? Ashton Kutcher is a dumb ass but he can’t be that big of a dumb ass. Still, do you believe once a cheater always a cheater? People thought he’d never cheat on Demi either but we saw what happened there. Mila thinks Ashton has changed, do you?

Is Mila Kunis’ Allure interview her first defensive position against all the Ashton haters? Do you like her “stand by your man” approach?