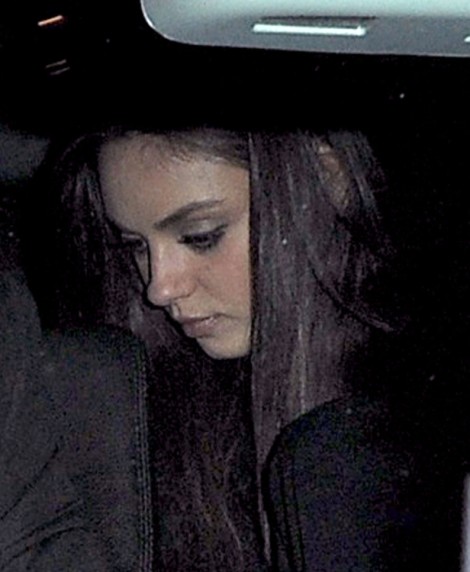 Good Lord could this be true? Did Mila Kunis come to the realization that Ashton Kutcher’s massive douchey ego is more trouble than it’s worth? Pictures don’t lie. That’s one forlorn chick. Yes, there’s a camera in her face and she’s probably being bombarded by paparazzi but we don’t have to consider that in our photo assumption. Are the Ashton Kutcher cheating stories getting to her?

Mayhaps. Regardless, Mila reunited with Ashton in London yesterday after he was done partying and flirting at the South by Southwest Festival. Apparently they were super affectionate and touchy-feely the entire night and Ashton kept copping feels of her ass. Noooooooooooooooooooooooo!

Ugh, so this isn’t over yet? I was getting excited. Rumors circulated that Mila was  telling friends that Ashton had “too much baggage.” And he does. Demi Moore is not going to go down easy in this divorce. We’ve all got a lot of fun in store with this one. But it looks like Mila’s going to stick around for it. She’s loyal, which is totally admirable. I just wish he deserved it more. I also wish I didn’t think he was such a loser. Why can’t she make me like him? Usually when a star I love happens to love someone else I love that person by association because I’m easy and childish that way. I started to appreciate Seal’s music after he married Heidi Klum. I turned a blind eye to Josh Brolin’s drunken messy issues when he was married to Diane Lane. I could actually look at Sean Penn when Robin Wright was around. But Ashton? I just can’t do it. Maybe it’s because they’re not married yet so I’m holding out. Marriage to her could possibly save his image but, if the guys I referenced above are any indication, Ashton will probably ruin it again for me anyway soon after.

Will Mila Kunis break up with Ashton Kutcher during this divorce process because it’s so much to handle or is she in this for the long haul?