Macaulay Culkin Clean And Sober Looking For Once, Trying To Win Mila Kunis Back? 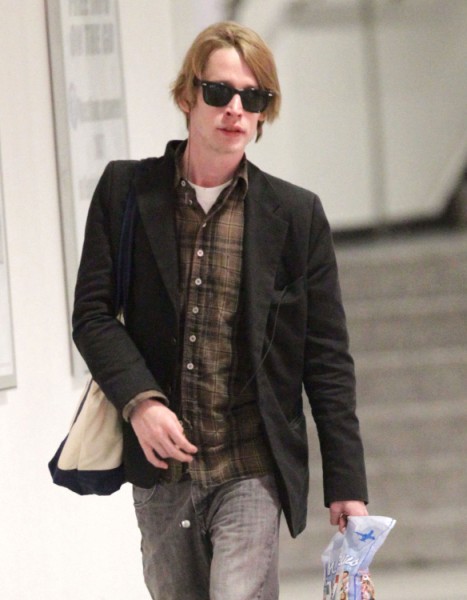 I know nothing sells like a Macaulay Culkin heroin story but I figured we take so much time to point out when the dude looks jacked up on everything under the sun we should do him the courtesy of remarking when he appears half way coherent – and, naturally, spin it in some way to Mila Kunis.

Why won’t I let this couple go? Because I just won’t. That’s why. And since Jennifer Lawrence and Nicholas Hoult broke up yesterday I’m in a nasty mood. Why can’t perfect people just stay together? Is it so damn hard to do that for me? So I need a wishful thinking post. I need some hope that true love is not dead. I need a sparkle above my horizon hinting that Macaulay can’t stand Mila with Ashton Kutcher just like the rest of us and in truly Herculean fashion kicked his demons and his nasty habits in an effort to woo back his one and only. And he took a shower! Take a look at these pics my friends. Romance is not dead.

Is it too little too late? Never! Maybe. Ashton’s speeding up that divorce. Mila’s at that baby making age and it’s probably only getting worse since anyone who’s anyone in Hollywood seems to be knocked up right now (Yay for Evan Rachel Wood and Jamie Bell!!). Ashton and Mila are INSEPARABLE. They’ve met the parents. They’ve spent holidays together. It’s not good. Not good at all. But let me remind you – Mila dated Macaulay for 8 years. She’s big on commitment  When she’s in, she’s in.  But if her longevity teaches us anything it’s that she’s not afraid to walk away. It’s hard to leave after spending that much time with someone. So this gives me hope. Macaulay Culkin clean and sober is a good thing. He’s walking in straight lines. He’s not buckled over in pain and/or withdraws. Dare I say it, has Macaulay turned a new leaf? So much about gossip is what you choose to believe. I need this today. I had hopes Jennifer would walk the red carper with Hoult. She’s a favorite to win the Golden Globes and he has a huge movie coming out for Summit. The studio would have been all over it. And now I have to  listen to all the Bradley Cooper flirting shit stories instead. Yes, thank you Macaulay. I needed this. Keep it up. I’m rooting for you.

Am I delusional to think the Mila Kunis/Macaulay Culkin love affair will happen again? Is she too engrossed in Ashton to realize anyone else is in the room?