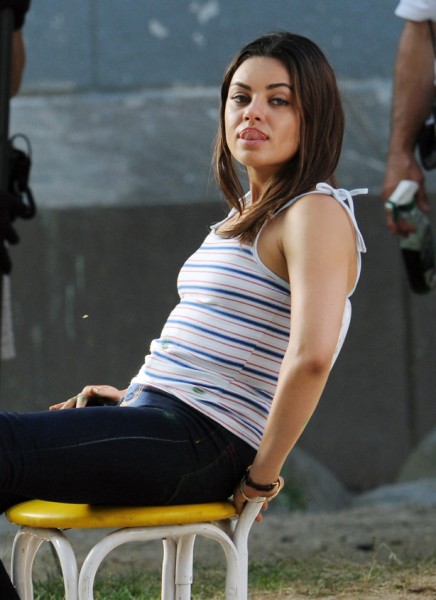 Even the world’s sexiest woman has her problems and Mila Kunis is in the throes of a full on image crisis! According to Star magazine, fashion house Christian Dior is pretty disappointed the actress started eating again after she retired her ballerina slippers in Black Swan. I’m not too surprised about that. Fashion houses like waifs whether they like to admit it or not. But Dior isn’t the only one freaking out over the extra pounds. Ashton Kutcher likes his girls skinny and Mila’s staggering 123 pounds could become a problem for the highest paid actor on television.

I’m sorry but I can’t even pretend this one is real. Why would Dior hate on Mila for getting fuller and then go on and hire Jennifer Lawrence to be the  next face of the company? It makes no sense. Jennifer’s known for her healthier figure. She’s never apologized for failing to be a size 00. Oh no, she might be a size 2! This is crap.

And as for Ashton liking his girls trim… I can’t even get behind that and you know I love to call Ashton out for his douchery. He’s got to realize how lucky he is that Mila is even looking in his direction. And, if anything, he’s got to love the fact that she enjoys food. He had a wife that didn’t. Ashton had loads of skinny in Demi Moore. She was all about the deprivation and the raw and Charlie’s Angels cameos in a bikini. And look where it got her? On the cover of People magazine this week looking like a broken hot mess. Thanks a bunch broccoli.

Dudes like curves. Dudes like to watch football with a simple environment of chicken wings and barbecue chips. The last thing Ashton wants to worry about when the Bears need a touchdown with two minutes left in the fourth quarter is his silently suffering girlfriend in the corner who won’t touch the celery because blue cheese dip is slathered all over it. Mila is low maintenance and if that means she’s a size 2 instead of size 000 then I’m sure Ashton’s down. If not, he’s even douchier than I give him credit for – and that’s bad.

Do you believe Dior and Ashton are upset about Mila Kunis’ weight? Did Demi Moore plant the story? Just kidding!