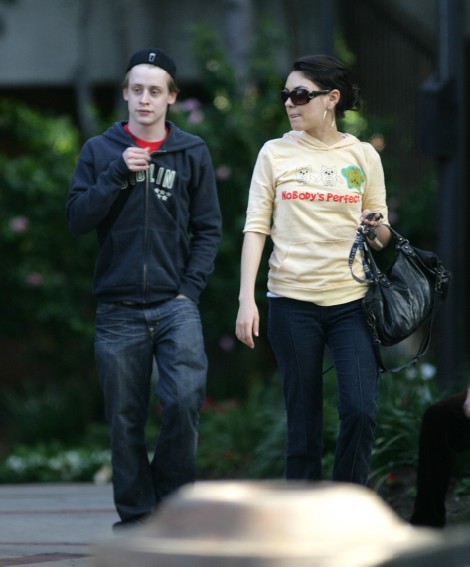 Demi Moore isn’t the only ex-spouse spitting nails over the Ashton Kutcher/Mila Kunis relationship. Mila’s ex Macaulay Culkin is also having a terrible time with the odd ball hook up and staged his own little intervention. In between his busy schedule of throwing birthday parties for dinosaurs (nothing short of amazing) and falling over in public because of his alleged heroin use, Macaulay took time to tell Mila what we’re all thinking:  Mila, you in danger girl.

OK, so maybe Macaulay didn’t get inspiration from Ghost to tell Mila Ashton’s not the guy for her, but according to Star magazine, Macaulay was spotted confessing to his ex love that his life is falling apart without her and she needs to dump Ashton Kutcher and get back with him. So… Mila needs to break up with a working movie star who just happens to be the highest paid actor on television to go back out with a rumored drug-addicted former child star? YES! YES! YES! It’s a no brainer Mila! Macaulay is your lobster!

Just look at the picture of them above. They’re so perfect and pint-sized together. They’re like hobbits. It’s adorable. And I know, I know nothing of their relationship and I’m sure Macaulay comes with a shit ton of baggage but anything’s got to be better than Demi Moore. That spiteful kind of baggage isn’t going anywhere for a long time. Trust. How can you just turn your back on eight years, Mila!? But what do I know? I’m just the dumb bitch who likes Home Alone, right? Fine. Fine!

Macaulay’s got to hate Ashton Kutcher. He was working with Mila the entire time they were dating. That’s got to be weird to watch now. I mean, Mila and Macaulay must have had plenty of Did I tell you what that douche Ashton did on set today? conversations and now she’s sucking face with him all over NYC. Poor Macaulay!

Maybe Macaulay’s not trying hard enough? Maybe Mila needs a ginormous romantic gesture (similar to Tom Cruise giving up the Scientology). If Macaulay Culkin fights Ashton Kutcher over and over for her (emotionally and psychologically, definitely not physically), would Mila come around? Or is Mila way too far gone? Molly, you in danger girl!