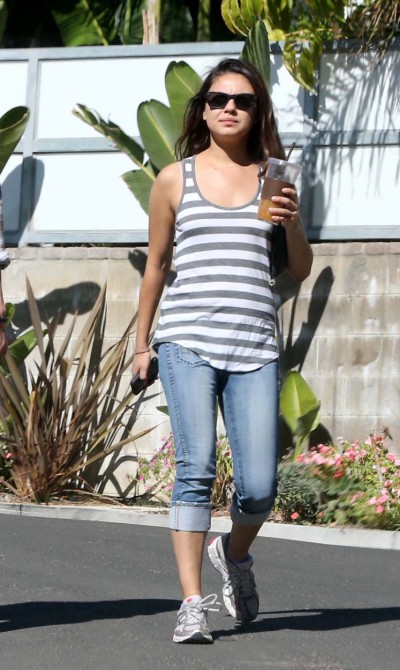 Is that a baby bump, Mila Kunis? Ashton Kutcher and Mila were spotted leaving a friend’s home yesterday in LA and the loved-up couple appeared to be in the family way.

Now, I hate baby bump stories and am loathe to take any of them seriously but the Daily Mail was the first to point Mila’s little paunch and it totally looks legit. She also could have had a big lunch. So check out the pics. What do you want to believe?

I DO NOT want Mila to procreate with Ashton but has the couple been hinting at this all along? Mila recently told Glamour magazine: “I do want a family. I’d rather be in love and have a baby than a movie.” And the gossip mags have said Ashton’s wanted to be a daddy for awhile. I remember there were all those stories that he and Demi Moore tried to have kids for a long time but it never worked out and that’s one of the reasons he stepped out on her. Whatever Ashton.

Have you noticed that Mila’s eating something in just about every pic with Ashton lately? Now, that means absolutely nothing. And if belly sizes are indicators, it looks like Ashton’s carrying around a little bundle of joy in these pictures too. Still… they’ve been so together lately. They’re definitely not hiding anything anymore. I’ve just got a sick feeling about this. I mean on one hand congrats to them. They’re both at that age and seem really solid. But on the other, it’s ASHTON KUTCHER! She can do so much better!

But what about the timing? Is it possible she could be showing so soon? They supposedly started hooking up back in April which means they’ve been together for about seven months. So I guess it could make sense for her to be a few months pregnant if they waited before getting knocked up right away. Oh, Mila. I thought he was just a rebound fling! I suppose he still can be….

What do you think? Is Mila Kunis pregnant with Ashton Kutcher’s baby?