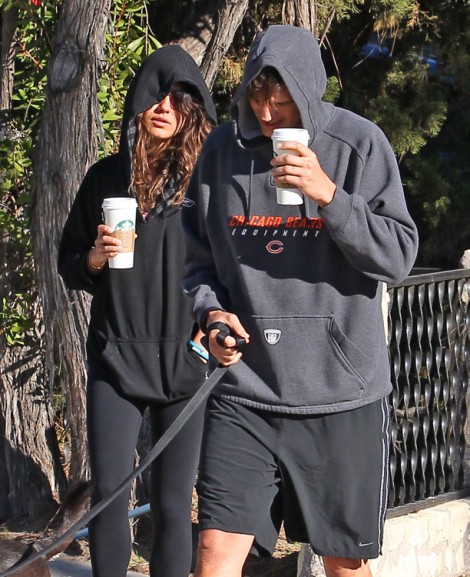 Why isn’t anyone teaching Lindsay Lohan how to fish? Everyone keeps giving her fish but no one is teaching her how to get them herself. I know (despite all her denials) she isn’t getting fish for free with all her rich admirers but I’m guessing there aren’t many lessons going on in those bedrooms either. Still, you’d think Ashton Kutcher with all his Buddhism or Kabbalism or whatever the hell he’s into these days would know enabling never helped anyone and, we can probably all agree, Lindsay Lohan needs some help.

But Ashton just can’t cut the train wreck loose. According to the National Enquirer Lindsay has been using Ashton during this tough financial time and he can’t say no to her. The mag reports the two hooked up a few years back which is why Ashton feels a responsibility towards her. I didn’t now that, did you? I knew they were friends because she used to date Wilmer Valderrama and she even guest starred on That 70s Show but I was unaware they dated (I’m still not sold they did). So I get the connection and I even get the fact that Lindsay is just pathetic enough to call in a few favors after all these years. And Ashton has a history of emotionally dysfunctional women. But Mila Kunis has put a stop to that run and, apparently, she’s putting a stop to Lindsay. She’s demanding Ashton turn his back on her like everyone else.

I can totally see that too. Mila doesn’t seem like the type to let some crackie ho use her man for her crackie ho business. I’m sure Lindsay tries when Mila’s not around but I’d love to have been a fly on the wall when Mila found those text messages. And you know she checks them. Wouldn’t you with Ashton’s history?

So… I don’t know. This story is courtesy of the Enquirer so I have my doubts but I could totally believe a Lindsay Lohan/Ashton Kutcher conspiracy. Lindsay’s disgusting enough. Ashton’s gullible and stupid enough and Mila’s awesome. And haven’t we all learned by this point that anything is possible when Lindsay Lohan is involved?

Is Lindsay Lohan using Ashton, you think? Coincidentally enough, there are reports that she’s also hitting Charlie Sheen up for more money so maybe this is still an Ashton vs. Charlie thing. Way to play them off each other Lilo!