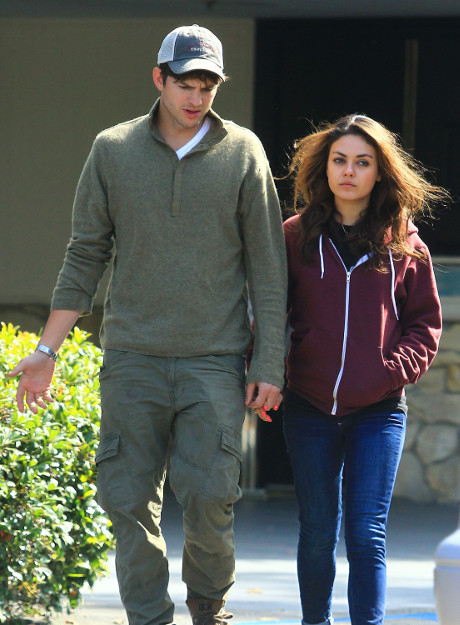 Ashton Kutcher usually isn’t in the news for getting feisty with paparazzi, but recently he was filmed standing his ground when a couple photographers swarmed him as he and Mila were leaving Carlitos Gardel Restaurant in Hollywood. He wasn’t unnecessarily aggressive like some other celebs we know (ahem, Alec Baldwin), but he told the photog to “Get lost” repeatedly. The interesting part comes when Mila Kunis is seen sneaking into Ashton’s car, making Ashton’s whole charade appear to be some decoy act to get Mila into the car unseen.

For the full video CLICK HERE. Some people are speculating that Mila’s recent coyness might be due to the fact that she’s pregnant. Do you think this is within the realms of possibility? Ashton and Mila have recently talked about how they’re ready to settle down and, perhaps, even begin a family.

According to reports, Mila was wearing a baggy shirt and baggy pants that night, the perfect attire if you’re trying to make a baby bump appear a little less bumpy. What do you make of Ashton’s weird, sort of uncharacteristic, paparazzi outburst? Is there some long winded reason behind it, or is he just following a long line of celebs who HAVE HAD IT with celeb photographers?

(Note: the above pic was not captured during the night of this incident)