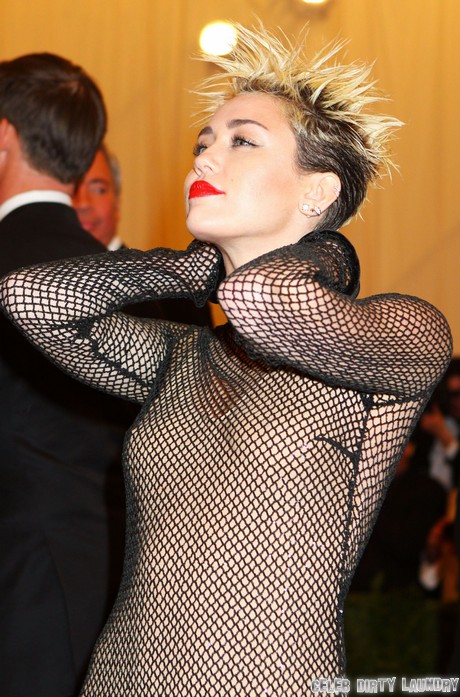 So many celebs and their fans were anticipating the 2013 Met Gala that it’s easy to lose track of who was there and what was going on. Miley Cyrus was one of those who anxiously awaited the big night. She knew in advance that January Jones would be there and Miley dressed to show her up. It was like game day for Miley. She wanted to show up and be the one that everyone noticed and that’s exactly what happened.

According to the May 27th print edition of Life & Style, Miley hit the red carpet in a fishnet dress with a great punk edge and her look was considered groundbreaking! She was considered a fashion maverick while January dropped the ball completely. Her look was panned and called “alien fug” and by January’s low key demeanor, she knew that she was a hot mess.

Miley spent the evening as the punk bell of the ball, surrounded by friends and in a great mood. Meanwhile January was somber and kept ducking outside to smoke. Her fling with Liam Hemsworth is what was said to unravel Liam and Miley’s engagement a few months back. While the couple has yet to confirm their split they are living very separate lives and Miley has gone from broken hearted to enjoying her freedom.

Maybe January is beginning to get the idea that being a chronic man stealer doesn’t lead to a happy life. Choosing to always be the side dish doesn’t keep anyone warm at night. Miley may have been cheated on but at this point in time she’s clearly much happier than January and that’s a pretty big victory for the former Disney star, don’t you think?

Will Miley and Liam ever fix things well enough to get back together again? Tell us your thoughts in the comments below!