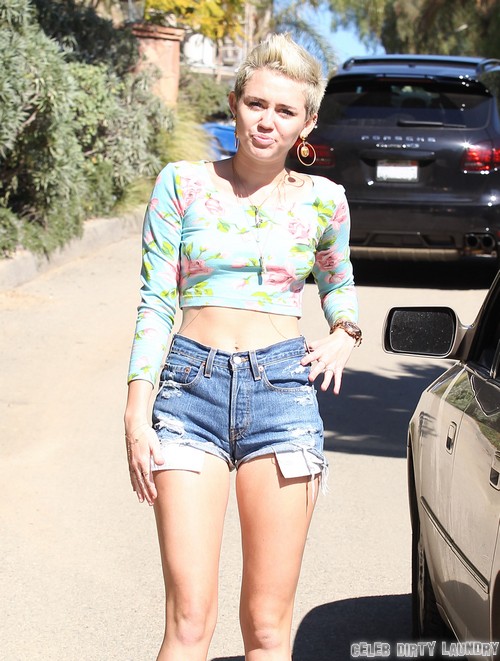 We aren’t exactly huge fans of Miley Cyrus or anything, but when she stood up for herself against gossip bully Perez Hilton, we gained some huge respect for her. It’s not much respect, per se, but it’s better than nothing, right?

Perez started off his stupidity by claiming that Miley and Ed Westwick had become an item. That is, despite the fact that Miley is in love with and engaged to her hot Aussie piece, Liam Hemsworth. He said, “Did the Mileybird just up and decide it was time to boucn on fiance Liam Hemsworth?? The two were spotted hanging out late Thursday night, as Ed made his way into the car where a bashful Miley was waiting. But not before the shutterbugs captured a few glistening moments of the shocking twosome.”

Interestingly enough, the gossip hound never provided photos of Miley and Ed together in the same shot. Not letting Perez get the best of her, she opted to respond to the lies that he was creating. She said, “Hope you find love one day but you can not f**k with mine. I’ve never been [with] Ed W in my life. I was at the studio last night working on my record and never left with anyone other than my assistant.”

She went on to say, “What happened to your big enlightenment…what happened to your promise to spread love not lies.. And to be a decent human being with values and morals??? Dude you ask for people to respect you and your relationships I demand the same thing.”

She continued to say that Perez is “the first one to write about my engagement and my wedding and how happy u r for me and the first to try to tear my life. Respect, love & compassion are mandatory….hope this message finds you happy and healthy.”

Spoken like a true adult! But we’re still left wondering if Perez’s lies caused her any relationship drama with Liam? Is that why she is so vocal?