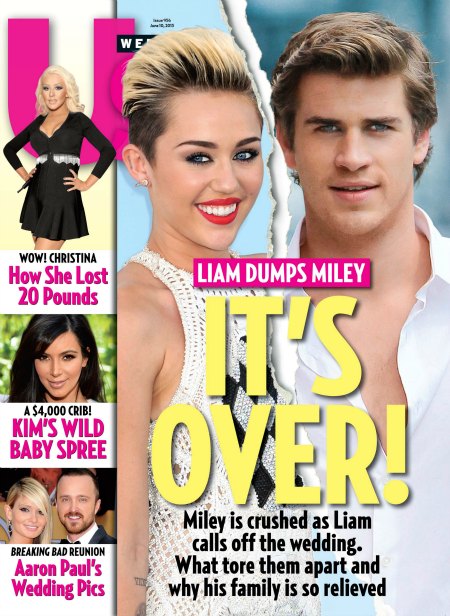 Miley Cyrus and Liam Hemsworth grace the cover of the latest issue of Us Weekly. Apparently the news of the week is that Liam has officially dumped Miley. In fact, he was said to have called time on their engagement, thus cancelling the wedding plans!

They have had quite the bumpy relationship, considering that he was rumored to have cheated on her earlier this year with January Jones. They were said to be in the back of a car together kissing right before a pre-Oscars party. This made Miley take off her engagement ring, even though she claimed that she merely sent it in to be cleaned.

And these recent rumors that Liam has been flirting around with Jennifer Lawrence hasn’t helped things with their relationship, either. So perhaps Liam went too far with Jennifer and decided that she is actually the girl for him? It could happen, right?

Still, we’re going to wait for the official confirmation from Miley Cyrus herself. What do you think?