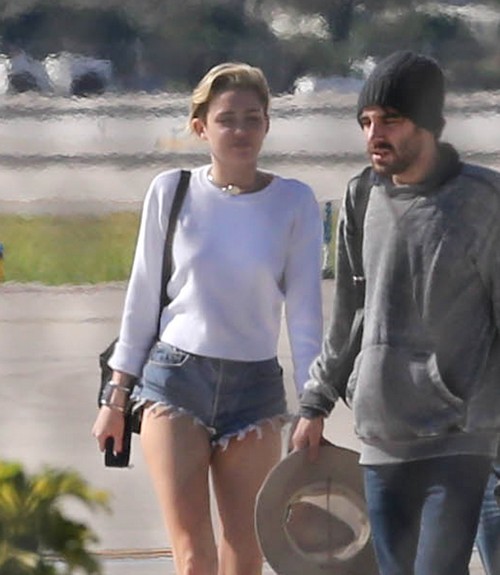 Miley Cyrus loves to shock her fans, actually she goes out of her way to do so. But, today she has shocked everyone without even trying to. Miley Cyrus, The Disney star turned Twerk Queen was just photographed at a Miami airport with the last person anyone expected her to be seen in public with. Kellan Lutz, of the Twilight franchise. The pair looked pretty cozy as they arrived at an airport in Miami via the private jet they shared. Kellan even held the door open for Miley as they entered the airport, chivalry isn’t dead!

Are Miley and Kellan hooking up or just merely friends carpooling, er jetpooling, to Miami? Or does the pop star just have an action film-star fetish? Miley has always been bitter when it comes to her ex Liam Hemsworth’s Hunger Games fame, and it looks like she is strategically planning her next relationship. It’s no secret that Kellan has landed the lead role of Hercules, in Hercules: The Legend Begins. The film is supposed to be hitting theatres in March 2014, and it is expected to be a huge blockbuster. It looks like Miley is being proactive and snagging Kellan now before his career blows up. Which, is probably the smartest career move Miley has made in a while!

Do you think Miley Cyrus and Kellan Lutz are hooking up, or just hanging out? Let us know in the comments below.

Miley Cyrus and “Twilight” star Kellan Lutz arrive together on a private jet in Miami, Florida on December 18, 2013. Are these two just friends, or has Miley moved on to another action film star?!