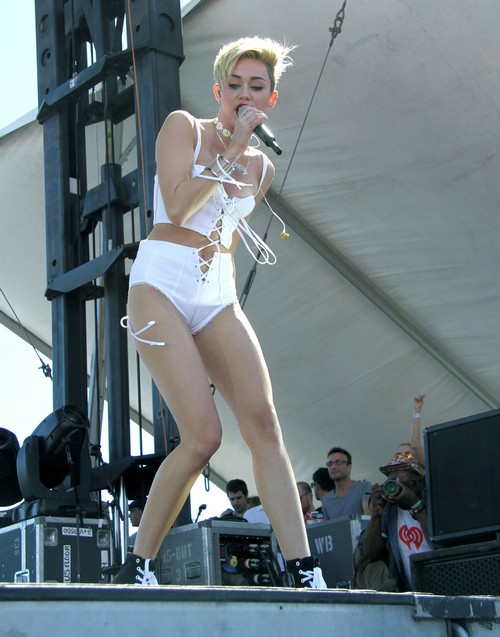 It was only a matter of time before Miley Cyrus responded to Sinead O’Connor’s open letter Dear Miley. Granted Sinead could have privately sent Miley this message but since it seems nothing is done privately these days she went ahead and posted it for all of us to see. It was heartfelt and filled with a lot of truth, but apparently Miley was none too pleased with the unsolicited advice because she went ahead at tweeted “Before Amanda Bynes … There was …” with a link to Sinead’s tweets from two years ago when she was in the midst of a mental breakdown. 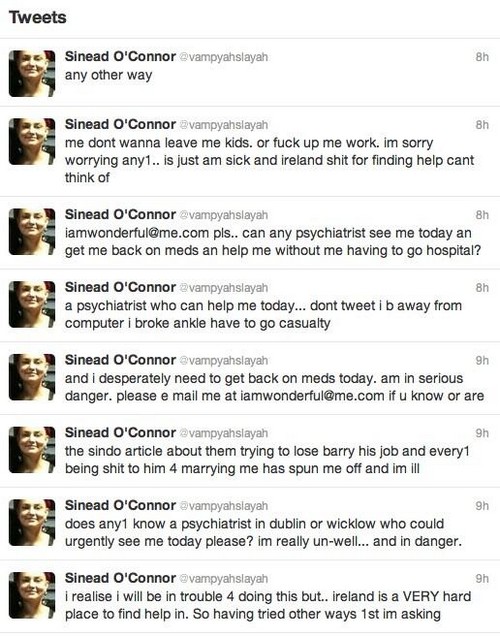 First off why bring Amanda Bynes who is currently being treated for mental illness into it? Second off, sweet niblets Miley after all these years in the business haven’t you learned that sometimes no response is better than a dumbass one – oh wait I forgot you rather have us talk about you for two weeks than two days. Well straight up your response was insensitive to not just Sinead and Amanda but to anyone suffering from a mental illness. Rightfully so Sinead was none too pleased with Mileys diss and kept the feud going by posting a response to Mileys tweet on her Facebook, and it went a little something like this:

Miley… Really? Who the fuck is advising you? Because taking me on is even more fuckin’ stupid than behaving like a prostitute and calling it feminism. You have posted today tweets of mine which are two years old, which were posted by me when I was unwell and seeking help so as to make them look like they are recent. In doing so you mock myself and Amanda Bynes for having suffered with mental health issues and for having sought help. I mean really really… who advises you? have you any idea how stupid and dangerous it is to mock people for suffering illness? You will yourself one day suffer such illness, that is without doubt. The course you have set yourself upon can only end in that, trust me. I am staggered that any 20 yr old woman of the 21st century could behave in such a dangerous and irresponsible manner as to not only send the signal to young women that its ok to act like prostitutes but also to the signal that those who have suffered or do suffer mental health problems are to be mocked and have their opinions invalidated. Have you no sense of danger at all? or responsibility? Remove your tweets immediately or you will hear from my lawyers. I am certain you will be hearing from all manner of mental health advocacy groups also. It is not acceptable to mock any person for having suffered. It is most unbecoming of you to respond in such a fashion to someone who expressed care for you. And worse that you are such an anti-female tool of the anti-female music industry. I hope that you will apologise to Amanda Bynes and to any person who has been wounded by your mockery of those who have suffered. And I hope that you will wake up and understand that you in fact are a danger to women. Furthermore you posted a photo of me tearing the pope’s photo .. as if to imply insanity.. by doing so all you have achieved is to expose your staggering ignorance. I suggest you read The Philadelphia Report, The Boston Report, all the reports which will illuminate for you why that action of mine remains sane and valid. By mocking it you mock every child who suffered sexual abuse at the hands of priests and had it covered by the Vatican. You could really do with educating yourself, that is if you’re not too busy getting your tits out to read.

Ms Cyrus has today posted tweets of mine which are two years old and which were sent when I was ill and seeking medical help. She has done this in an attempt to deliberately cause me harm and hurt. I wish to confirm that I am quite well and kindly request people cease e mailing me in the mistaken belief these are recent tweets. Ms Cyrus’ lawyers will be contacted by mine regarding this matter. I confirm also that I do not at all support or condone the abuse or mockery of those who have been brave enough to openly discuss mental health issues. Mockery causes deaths. Period. It is an unacceptable form of bullying, no matter who it is doing the bullying.

Of course Miley wasn’t going to let Sinead have the last word so she went on to tweet “Sinead. I don’t have time to write you an open letter cause Im hosting & performing on SNL this week.” As well as, “So if youd like to meet up and talk lemme know in your next letter. :)”

All joking aside Miley don’t make light of something so heavy as mental illness especially since your actions as of late have us all wondering if you too might be chemically imbalanced. Remember there is a thin line between being famous and infamous and once you cross it there is no coming back.

Editor’s Note: I’m team Miley all the way on this one – STFU Sinead and stop being jealous that your career is in the garbage and Miley’s is soaring – Miley is just doing what she needs to do to make it – she has no talent and marginal looks so what else can she do but be ‘outrageous?’ She isn’t the first nor will she be the last to use sexuality in lieu of talent. And Sinead, when you write an open letter calling into question someone’s entire M.O. you better expect an open and harsh response.