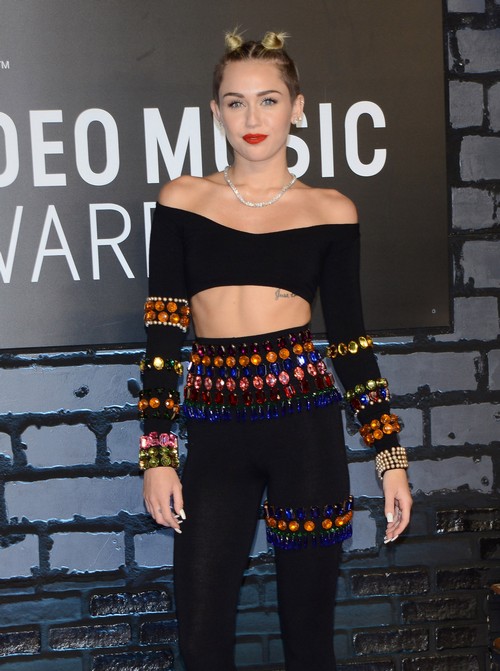 We’d like to send our sincere condolences out to Billy Ray Cyrus. Unless you’ve been stuck under a rock, you’ve seen photo and video of Miley Cyrus’ twerk fest at the Video Music Awards. This all started when rapper 2 Chainz dropped a super popular Birthday Song, in which he insists, “All I want for my birthday, is a big booty ho”. Cyrus’ loyal friends got her a ‘big booty ho’ for her birthday, at the mega star’s demanding request. She cut her hair, ditched her Disney glow, starting smoking weed, popping molly, and has been twerking up a storm ever since.

Robin Thicke’s poor mother responded to the record breaking performance, “I just keep thinking of her mother and father watching this. Oh, Lord, have mercy. … I was not expecting her to be putting her butt that close to my son. The problem is now I can never ‘unsee’ it.” Thicke conveniently released his twerk smothered new video, “Give It 2 U,” in the wake of Miley’s performance firestorm.

The Onion knew, in all its hilariousness, that Miley Cyrus eventually would be licked clean of all entertainment value. Television, movies, sold out concerts, clothing, and toys left the desperate showgirl with nothing left to bring to the table. Professionals warned, “Most experts agree that, at current usage levels, Miley Cyrus will be drained dry of entertainment value by 2013.”

Dr. Justin Canty predicted the #Smilers’ meltdown 5 years ago. “Miley is potent entertainment resource but we are overusing her at incredible levels. She appears on television, albums, toys, clothing… If we don’t act now. The down to earth Miley we know will be wiped off the earth for ever.” Experts feel Miley hit her super stardom peak at such an early age, and knew it would backfire. They even suggested she’d eventually be worse off than Lindsay Lohan and Britney Spears.

Miley’s career is either about to crash and burn or take off. Rolling Stone said the hot and sticky performance nearly made them erupt prematurely, “Miley was the one star in the room who truly understood what the MTV Video Music Awards are all about! Miley stole the night, which is why the nation is still in recovery today. Thanks, Miley…”

Since you can’t change the world, may we suggest you purchase a latex nude 2 piece and practice some epic twerking? If you missed all the glory, check out Miley Cyrus’ VMAs performance below: