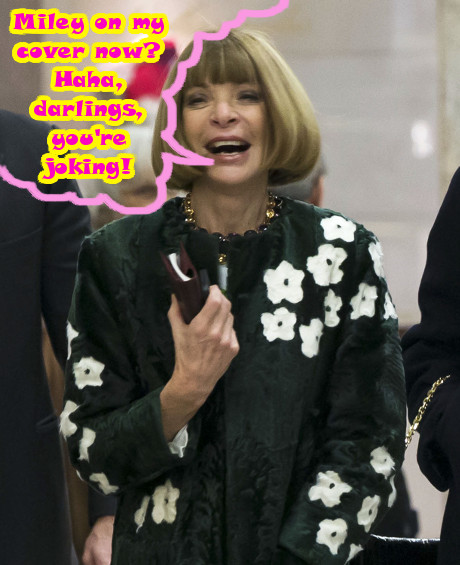 If Hollywood stars have learned anything, it’s that you never make Anna Wintour mad. It seems Miley Cyrus has done just that. With Miley’s recent style evolution, Wintour deemed her an emerging fashion icon. She even offered the pop star the cover of Vogue’s December issue. However, after seeing Miley’s VMA performance, the notorious editor-in-chief has put her foot down once again.

“Anna found the whole thing distasteful. She decided, based on Miley’s performance, to take the cover in a different direction,” says a Vogue insider.

Miley has reportedly already posed for the cover. But Wintour always gets her way. This isn’t the first rejection Miley has faced either. Her boyfriend/fiancé, Liam Hemsworth, is said to have one foot out the door.

“She doesn’t care at all. She’s young and if he wants to go, she thinks its fine,” reveals a source.

She probably won’t care about being axed from Vogue either. Miley has been taking fashion risks on the red carpet lately. The edgier looks seem to be working for her. But she is at a stage where she is old enough (and rich enough) to do whatever she wants despite the opinions of others. Miley won’t let anyone stop her from doing what she wants, not even Anna Wintour. What are thoughts on Miley’s new style?