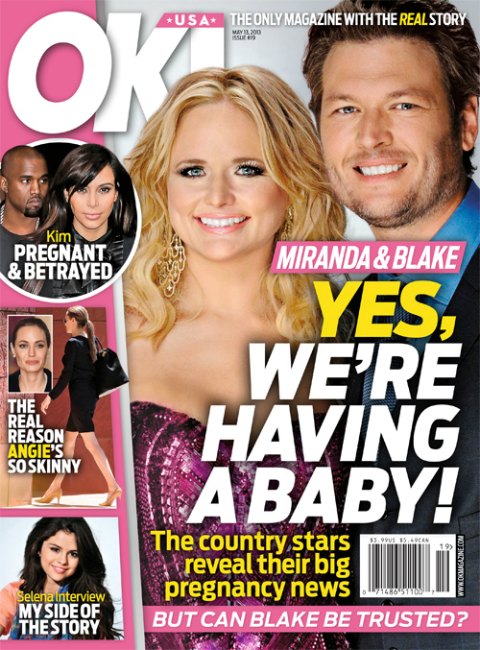 Country singers Miranda Lambert and Blake Shelton appear on the latest cover of OK! magazine and the tabloid has revealed that they are having a baby!

The magazine announces the couple’s big news, but asks the question as to whether or not Blake can actually be trusted. There have been constant rumors as of late that Blake has been skeeving around behind Miranda’s back. Even still, Miranda famously said that she would stand by her man. Was she right? Now that she’s pregnant, we’re guessing that she’s stuck with his cheating self?

In addition, the magazine reports that Kim Kardashian is pregnant and betrayed by her boyfriend Kanye West. Is she finally coming around to the idea that she’s being used as a baby maker? In addition, there is an apparent “real” reason that Angelina Jolie is so skinny. Is there something wrong with Angie? Lastly, Selena Gomez tells her side of the story! Is there something about her relationship with Justin Bieber that we haven’t heard yet? What do you think?