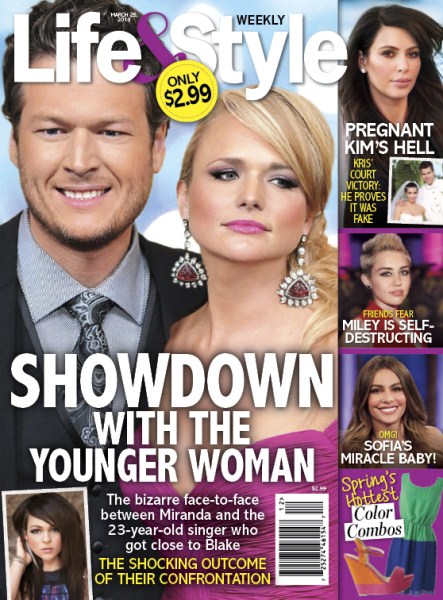 It looks like there could be some truth to those rumblings about a bit of trouble in Miranda Lambert and Blake Shelton’s marriage. About a year ago Blake started a Twitter friendship with a 22 year old singer named Cady Groves and he helped her to get her first single and video done. The two met face to face and apparently got hammered before anything else. They’ve also had can interesting flirtation on Twitter that Miranda has sat back and watched unfold. She finally demanded to meet Cady and according to Life & Style Magazine that conversation was more than a little tense.

Miranda is always worrying about where Blake is and what he’s doing. If you remember, their relationship began while he was married and Miranda was a young Nashville up-and-comer. She knows exactly what her husband is capable and it makes her incredibly nervous.

Also in the latest Life & Style you can read all about Kim Kardashian’s baby drama. Apparently the reality star feared she was having a miscarriage last week. She is now fine and doctors have ordered her to rest. This chick just puts her baby second every chance she gets. Who jet sets all over the world and goes to the gym 7 days a week when pregnant? Kim needs to slow down and forgive her changing body rather than continually punishing it!

Another lady making headlines is Miley Cyrus. Her engagement to Liam Hemsworth hit a snag a few weeks ago when it was revealed that he cheated with January Jones. Now it looks like the couple has split with Miley partying hard in L.A. While Liam does god knows what down under. Her friends fear she’s spiraling out of control and you’ll have to grab the latest Life & Style to read more about her erratic behavior!