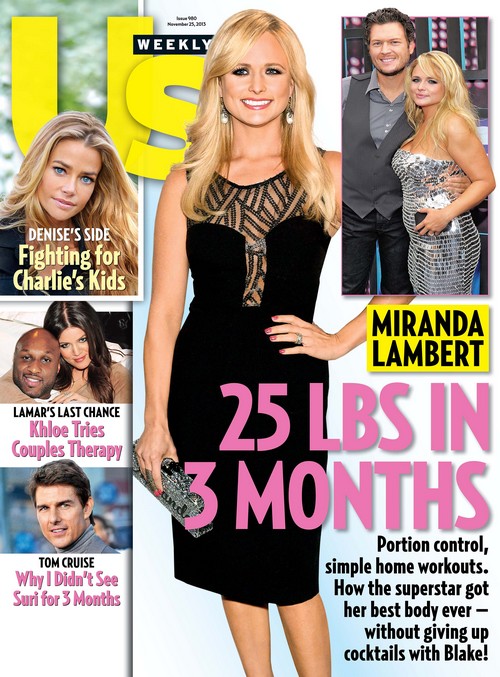 The latest cover issue of US Weekly focuses on Miranda Lambert‘s shocking weight loss, which was first revealed when she showed up at the CMA Awards looking like a ghost of her usual self.

US Weekly claims that Miranda lost 25 pounds in three months, and they make it sound as though every woman should aspire to do that. Um, do they not realize that losing that kind of weight in such a short period of time is unhealthy, and more importantly, unsustainable? Not only does it wreak havoc on the body, but there are also a lot of psychological and mental issues involved.

But then again, this is a fluff tabloid. Why would they ever explore the consequences of weight loss? No, instead they glamorize it and make it seem desirable. The tone of the report itself is ‘Go Miranda’ and ‘Look at her new body’, and the report focuses on how Miranda apparently achieved this weight loss with ‘portion control’ and ‘simple home workouts’. Also, she supposedly did it all without ‘giving up cocktails with Blake [Shelton]’.

Ugh. Who actually believes that Miranda managed to lose that much weight through just portion control and simple workouts, and not even giving up drinking? Puh-lease. Not only did she probably cut out alcohol from her life [spare the occasional wine glass], but I have no doubt that she severely restricted her diet intake and also worked out like a maniac. It’s simply impossible to lose that kind of weight in such a short span of time otherwise. But you know, that version’s not very glamorous so ‘simple home workouts’ it is.

US also has a report on the recent Denise Richards – Brooke Mueller children drama. According to Denise, she fought for the kids as much as she could, but there was simply no way for her to keep them in their current state.

Lamar Odom and Khloe Kardashian are also reportedly still trying to fix things between them, even attempting couple’s therapy as a last-ditch effort.

And finally, Tom Cruise is doing some damage control via US Weekly and People, giving his side of why he didn’t see his own daughter, Suri Cruise, for three months after his divorce from Katie Holmes. Whatever his excuses are, they’ll no doubt be as flimsy as they were in the deposition.