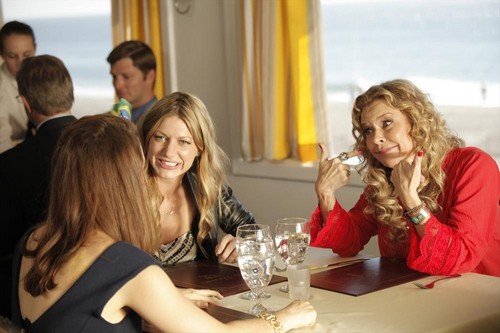 Tonight on ABC their new drama MISTRESSES continues with an all new episode called, “Guess Who’s Coming to Dinner?.” On tonight’s show simmering tensions resurface when Janet – Savi and Joss’ free-spirited, open-minded and often absent mother-comes for an unexpected visit.  Jo Beth Williams guest stars as “Janet.”  Did you watch last week’s premiere episode? We did and we recapped it here for you!

On last week’s show Savi wanted to fight for her relationship with Harry, even if the baby was Dom’s; April was still reeling from the revelation that her supposedly dead husband, Paul, was actually alive; Karen was surprised when Sam hires her business partner as his therapist and sought out his mother, Elizabeth, to express her concern; and after an uncomfortable run-in with Alex’s ex, Joss wanted to redefine her relationship with Alex.

On tonight’s show when Savi and Joss’s free-spirited, open-minded and often absent mother, Janet (guest star Jo Beth Williams), comes for an unexpected visit, she brings big news but also stirs up some long-simmering family tensions. Now that Karen realizes that Elizabeth Grey (guest star Penelope Ann Miller) knew all along about her affair with Tom, she wonders if Elizabeth might have actually killed Tom because of her; and April questions whether she should tell her daughter she’s dating Richard (guest star Cameron Bender), although she has yet to tell Richard about the return of her supposedly-dead husband.

Tonight’s episode 9 is going to be an exciting one filled with drama that you won’t want to miss – the producers know they need to get you interested right from the get go therefore you can expect a great show.  Be sure to tune in for our live coverage of ABC’s Mistresses tonight at 10 PM EST! While you wait for our recap enjoy the video below and leave a comment.

Savi and Joss’s mom has come for a visit. She gets to see first-hand her son-in-law packing up his stuff. Apparently her daughter haven’t notified her to the situation.

Her daughters miss her visit because their trying to cheer up their friend, Karen. Karen suspects Elizabeth always knew about the affair and is even starting to wonder if Elizabeth killed her husband and used Karen to help her do it. April suggest she should hire someone to look into Elizabeth. That’s the only way to know for sure.

Karen on the other hand is shelving her concerns to help April. April is confused over what to do about her still alive husband and her current boyfriend. Karen for some reason advises April to keep some things to herself. As if secrets are still the best answer to everything.
Joss doesn’t want her sister to keep any secrets but she will protect them from their mother. Even though if Savi did decide to look at the envelope she would at least know who fathered her child.Instead she chose the ostrich method of hiding her head in the sand again. She’s a slow learner. Also a good liar by putting off both of her potential baby daddies.

Janet took her daughters out to lunch. She’s happy to share her news. She’s moving to Rio and will be gone at least a year maybe two. If Savi doesn’t hurry and speak the truth Grandma is going to miss the birth of her first grandchild. In the meantime some family truths come out. Savi’s dad left and he didn’t involve himself in her life after her mom had Joss by someone else. Guess it runs in the family tree.
April’s husband makes another surprise visit. This time he goes to Karen and asks for help to get April to talk to him. Karen at first refuses until the guy subtly threatens to show up at April’s door. It look like he’s not afraid about being arrested for insurance fraud. Karen better not spring the guy on April at Janet’s party. April just invited her boyfriend and his daughter.

April doesn’t get ambushed by her husband but Karen does explain what happened.

Elizabeth set Karen up. Some papers supposedly from Karen were delivered to the law offices. In it they say Elizabeth’s husband was suicidal. Shockingly Elizabeth knows her husband didn’t have these sessions he was with her during the time on vacation.

Janet’s party is winding down when Janet blurts out that Savi should forgive Harry’s cheating. She knows its cheating that split the two up and figured it couldn’t be Savi. They correct her. Janet is hurt that Savi didn’t tell her but it hurts more when Savi explains why she never turned to her absentee mother for anything.

April is home alone when hubby comes by. It’s not for conjugal visits he actually wants to see his daughter, Lucy. Feeling cornered April has no choice now. She has to tell Richard what’s been happening.

Savi and Janet do make peace with each other. Savi still didn’t bring up the baby. Even when her mom said she’s make a good mom. Savi is there though to help her sister threw her own disappointment. Janet had promise to take Joss with her to Rio and ditched her at the last minute. No matter how they spin it, it was Savi that raised Joss.

In the end Savi decides not to find out about the baby’s paternity. She wants the baby to be only her’s for a while.

Karen gets served. The private detective couldn’t help her and now she has to face Elizabeth on her own.