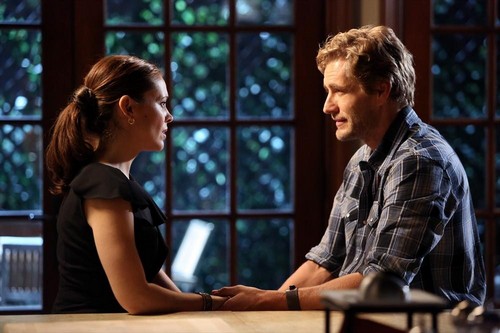 Tonight on ABC their new drama MISTRESSES continues with an all new episode called, “Ultimatum.” On tonight’s show Savi fights to save her marriage, even if the baby is Dom’s; April is still reeling after seeing her dead husband is alive; Karen seeks out Sam’s mother to discuss her concerns about him, and Judd redefines her relationship with Alex. Did you watch last week’s premiere episode? We did and we recapped it here for you!

On last week’s show Joss, terribly hurt that Savi hid her pregnancy and her illicit affair from her, moved in with April; Harry and Dominic angrily faced off at a social event; Karen met up again with Detective Newsome (guest star Gary Dourdan), but this time it was personal; and April struggled to put memories of her dead husband behind her so she can move on with a relationship with Richard.

On tonight’s show Savi wants to fight for her relationship with Harry, even if the baby is Dom’s; April is still reeling from the revelation that her supposedly dead husband, Paul, is actually alive; Karen is surprised when Sam hires her business partner as his therapist and seeks out his mother, Elizabeth, to express her concern; and after an uncomfortable run-in with Alex’s ex, Joss wants to redefine her relationship with Alex.

Tonight’s episode 8 is going to be an exciting one filled with drama that you won’t want to miss – the producers know they need to get you interested right from the get go therefore you can expect a great show.  Be sure to tune in for our live coverage of ABC’s Mistresses tonight at 10 PM EST! While you wait for our recap enjoy the video below and leave a comment.

This weeks episode of Mistresses heated up real fast tonight when April’s dead husband, Paul, showed up alive and well at her front door. The two talked and he claims that he faked his death because he wasn’t good enough for her. April struggles to understand why he left two grieving women when he tells her that he has been living with his fling for years- the woman that has been taking money from April after guilting her!

Savi has her first doctor’s appointment and Harry opts not to attend it with her. He is still smiling but clearly he’s not happy about the situation. While Savi is at the doctors Karen bumps into Harry on the beach. Karen knows that Harry decked the guy that may be the father of her child. He feels like Savi thinks they are on the mend when they really aren’t.

At the end of the day all of the ladies meet up at April’s to try and figure out what the truth is with Paul. They seem to be leaning towards him being in cahoots with Miranda and helping her to siphon money from April.

April calls Miranda and leaves her a message to meet her to pick up another check. She also calls Paul and tells him that they need to talk. It looks like she’s going to get everyone in the same place to figure out who is lying.

Karen has been spooked by Sam for weeks now and she knows that he broke into her office. She agrees  to meet with him and he admits that he has handled everything completely wrong but it’s because he believes that he’s in love with her,. After Harry does serious soul searching he tells Savi that if the baby isn’t his then she’ll need to choose between him and the child. Needless to say Savi is a basketcase to hear that he won’t raise another mans baby. She tells him that she’s keeping her baby and prays that he can fight for them.

April brings Miranda and Paul together and tells them to go back to the swamp that they crawled out of. Miranda leaves town but Paul is sticking around. Karen heads over to Sam’s to talk to his mother about his stalker behavior and while there she points out that Karen was screwing Sam’s father, a tidbit he overhears. Tune in next week for more Mistresses.