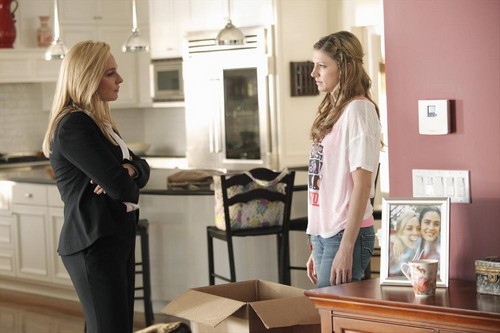 Tonight on ABC their new drama MISTRESSES continue with an all new episode called, “Decisions, Decisions” On tonight’s show Savi continues to hide her pregnancy from her husband, Joss’ friendship with her gay client takes an intersting turn, APril and Richard are brought closer together, and a private investigator asks Karen about her love. Did you watch last week’s premiere episode? We did and we recapped it here for you!

On last week’s show Savi found out she was pregnant and knews there’s a good chance the baby was indeed Harry’s and not a result of the one-time affair she had with Dom. Joss found herself befriending her gay real estate client, Alex, who had a controlling significant other. April was pressured by the woman who claimed she had a child by April’s dead husband. Also, despite Savi’s advice to the contrary, Karen continued to find herself drawn to the company of Sam Grey, the college-aged son of her dead lover.

On tonight’s show Savi is anxious to find out her paternity test results, while trying to hide her pregnancy from Harry. Meanwhile the friendship between Joss and her gay client, Alex, takes an interesting turn when Alex breaks up with her girlfriend; April and Richard are brought closer together when their 10-year-old daughters don’t show up for school; and after Karen receives a visit from a private investigator (Gary Dourdan) seeking answers surrounding her lover’s death, she meets with his widow, Elizabeth Grey (Penelope Ann Miller).

Tonight’s episode 5 is going to be an exciting one filled with drama that you won’t want to miss – the producers know they need to get you interested right from the get go therefore you can expect a great show.  Be sure to tune in for our live coverage of ABC’s Mistresses tonight at 10 PM EST! While you wait for our recap enjoy the video below and leave a comment.

There is a lot of damage control going on on Mistresses and this week’s episode is off to a flying star. Joss’ relationship with her client seems like it could turn from friendship to something more. Meanwhile Karen is once again faced with the investigator assigned to Tom Grey’s case. He wants copies of her notes and Karen sites doctor/patient confidentiality as her reason for not giving up the goods.

Savi has been trying to hide her pregnancy from Harry at least until she gets her paternity results back.  As she gets ready to head to the office she gives Harry a quick kiss and he notices that her breath tastes different. Of course he googles it and finds that metallic tasting breath is a sign of pregnancy.

After Joss and her client go for a run they decide to grab a quick shower-together. After the fact they confirm that is was fun, but Joss is definitely not gay.

April gets a phone call while sitting with her accountant. She needs to get to the school immediately and once there she finds Richard waiting. Both of their kids ditched school to meet Selena Gomez at a bookstore.

Karen decides the best way to handle the investigator by calling Tom’s wife. They compare notes on who knows what because in the end,. Tom’s wife killed him with the drugs Karen provided. The girls meet up to eat breakfast and Savi doesn’t want to talk about being pregnant but has to pee two seconds after arriving.

Harry of all people talked to Joss about her hook up with Alex. He suggests that having morals might make her a better person while his wife, Savi, is hashing stuff out with Derek. He tells her that he regrets nothing that they’ve done.

Karen sits once again to talk to Sam’s wife, Elizabeth. This time around she wants Karen to create notes  that say Thomas was suicidal. She refuses to do it and furthermore none of his notes actually said that. Elizabeth reminds her that they’re in this together. Harry insists that Savi take a pregnancy test and  she still doesn’t want him to know that she’s pregnant so she lies and tells him that she got her period instead.  It’s a half truth because Savi is afraid that she is losing her baby. After a quick doctors visit she finds out everything is fine.

April and Richard seem to be inching closer together. He stops by at the store to see her and after April tells him that she has never been impulsive she proceeds to plant a big kiss on him. They end up in bed together.

Tonight’s episode ends with Savi telling Harry that she’s pregnant but that he also may not be the father. Tune in next week for more Mistresses.