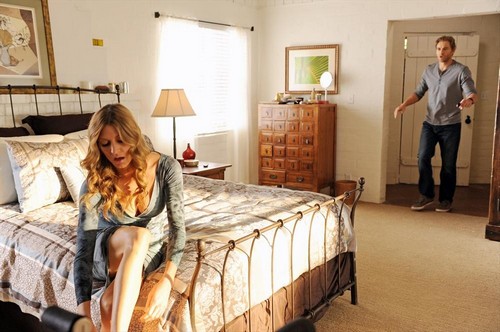 Tonight on ABC their new drama MISTRESSES continues with an all new episode called, “When One Door Closes . . . .”  On tonight’s show the judge delivers a shocking ruling in Karen’s case, Lucy goes missing, Joss tries to salvage things with Alex. and Savi and Dom grow closer, on the penultimate episode.   Did you watch last week’s premiere episode? We did and we recapped it here for you!

On the last episode Karen began her deposition into her possible role in the death and cover-up of her lover, Thomas Grey, where his son, Sam, had promised to be her alibi. Dominic surprised Karen when he brought in a private detective Anthony Newsome (Gary Dourdan) to testify. After Joss told Harry that Savi had yet to open up her paternity results, he decided to go to the clinic to find out for himself. And April and Richard (Cameron Bender), who have broken up, remembered they made an amusement park date with their kids they have to keep. Meanwhile, Joss’s feelings for Olivier (Mike Dopud) were stirred up when Alex asked her if she missed sleeping with a man.

On tonight’s show the judge delivers a shocking ruling in Grey Vs Kim. While the case is closed, there is even more trouble on the horizon for Karen; Paul (Dondre’ T. Whitfield) helps a frantic April search for Lucy after the school reports that she’s gone missing; Joss tries to salvage her relationship with Alex after she learns Joss slept with Olivier (Mike Dopud); and Savi is receptive to Dom’s advances, and accepts the fact that Harry is no longer part of her life . . . until she learns some disturbing news about the state of Harry’s restaurant, in the penultimate episode.

onight’s episode 12 is going to be an exciting one filled with drama that you won’t want to miss – the producers know they need to get you interested right from the get go therefore you can expect a great show.  Be sure to tune in for our live coverage of ABC’s Mistresses tonight at 10 PM EST!

Karen shouldn’t have been worried after all. The moment her case got put in front of a judge the same guy threw it right back out of court. He conveniently claimed insufficient evidence. Karen is a free and Elizabeth is left with egg on her face. That’s what you get when you try to manipulate the system.

Savi’s firm may be representing Elizabeth but that doesn’t her happy dance dedicated to her friend. If only she could have kept that buzz but it seem Harry hasn’t been telling her things. Like how he wants to sell their business. It must have slipped his mind what with trying to get his hand on the elusive DNA test results.

The restaurant is bleeding out money. They need some serious dough in order to stay afloat however the money to start it was purely Savi’s. Harry could save the place but he’s too busy wanting to self-destruct. Savi hears all of it and yet she doesn’t want to be the one that takes him off the edge. She wants to focus on dating Dominic. Yeah the other possible baby daddy that recently won the partnership over her. Husband who?

April was about to implode herself. She was in Paul’s face demanding the return of her child although he claimed he never took her when she finally thought “let me check home”. The same husband that was supposed to be dead gave her the lift. Lucy wasn’t home. She had gotten lost trying to make it Disney concert. The same concert she just happened to not once mention to her mother. The little brat.

Then there’s Joss. Joss can’t accept Alex broke up with her for a valid reason. She can’t understand why Alex won’t get over it. Never mind that she’s still sleeping with her boss. The moment she heard her French croissant was going back to Europe she decide to blame him for her failed relationship. She thought she would have two lovers but now she has none.

Karen’s good news actually had a sour after taste. The ethics board heard about what she did. They won’t permanently take away her license but they will suspend her for 6 months. It’s lucky break if Karen was grateful enough to notice. She thought Elizabeth must have called the board. She didn’t so who did?

After the day they’ve all had, it’s time for drinks. Joss couldn’t make it. Her pity party got another guest at the table in the shape of some mystery guy she met at the bar. The other girls have a drinking game of whose life is the worst. April wins with a runaway preteen daughter and a dead husband that keeps on wanting to have meetings. Still if Joss was there she would have won. That guy she picked up was listening to the word “No”. Luckily Harry got her out of there in time.

He took her home and when morning came he reassured her that it wasn’t her fault. Following the worst day and night, Joss goes back to work only to learn she got a promotion. Some people would be glad for a promotion but not Joss. She quits. Apparently it’s really depressing to be good at a job you hate.

For her hopefully last meeting with Paul; he suggested maybe she should Lucy to a therapist. The little girl has been acting out for a while now and April is confused on how to react. That’s all they talked about. The only problem is that Richard saw the meeting. He didn’t hear what they said. He only saw the intimacy.

Funnily enough its Richard’s fault that Lucy is acting out. Lucy didn’t like the idea of her mom starting another family. It’s been her and her mom for a long time and she wasn’t ready for that to change.

Joss is not a lesbian. She tried it to be with Alex but deep down she’s hetero. She’s willing admit to that now. As an apology she got Alex the dream house she was always looking for. That is how they met originally.

Shocker! Paul missed his flight. He tells April he want another chance. Even if he does goes to jail. What does April do? She gives him a free run on her merry-go- round. Forget Richard. Do these women know betrayal? Like the real meaning. Karen found her friend and business partner turned her in and Joss realizes the time Harry was over at her place, he took the DNA results. This is what happens when you give hurt people amino. The damage will blow back on everyone.