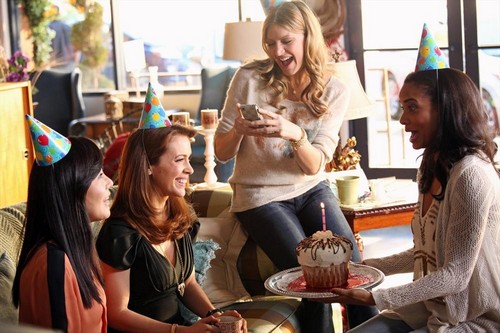 Tonight on ABC their new drama MISTRESSES continues with its season 1 finale called, “I Choose You”  On tonight’s show Savi’s road trip takes a shocking turn, April makes a decision about the men in her life, and Karen has a final showdown with Elizabeth Grey.   Did you watch last week’s premiere episode? We did and we recapped it here for you!

On the last episode the judge delivered a shocking ruling in Grey Vs Kim. While the case was closed, there was even more trouble on the horizon for Karen; Paul (Dondre’ T. Whitfield) helped a frantic April search for Lucy after the school reported that she’s went missing; Joss tried to salvage her relationship with Alex after she learned Joss slept with Olivier (Mike Dopud); and Savi was receptive to Dom’s advances, and accepted the fact that Harry is no longer part of her life . . . until she learned some disturbing news about the state of Harry’s restaurant, in the penultimate episode.

On tonight’s show a road trip to Palm Springs for Savi’s birthday takes a shocking turn; April makes a decision about the two men in her life, Paul (Dondre’ T. Whitfield) and Richard (Cameron Bender); and Elizabeth Grey confronts Karen in a final showdown.

Tonight’s season finale is going to be an exciting one filled with drama that you won’t want to miss – the producers know they need to get you interested right from the get go therefore you can expect a great show.  Be sure to tune in for our live coverage of ABC’s Mistresses tonight at 10 PM EST!

RECAP: It’s Savi’s birthday and instead of her usual down in the dumps she’s actually excited. Especially when she got a beautiful anonymously left on doorstop. It’s not from her sister or best friends. They denied it. But it isn’t from Dominic. He’s being kind of platonic since their awkward kiss and why would Harry send her a bouqet. He just told her she should handle her medical bills by herself.

Joss knows why reason why he would show Savi some loving. She doesn’t have the DNA test results anymore and knows Harry has them. But did he read them?

Meanwhile April decided to tell everyone at Savi’s semi-birthday celebration about her romantic trouble with Paul. However she was expecting any kind of support then she would have been wrong. No one likes Paul and they feel that she never even gave Richard a chance. Well, it looks like Richard is returning the favor. When April goes by his house she sees boxes everywhere. He’s packed up. Why?

Luckily it was just because he got his house painted. He’s not like Paul. When things get tough he doesn’t simply cut it and run.
Karen found out something as well. She went to go see her therapist and for once chose full honesty about her affair with Thomas Grey. What do you know her therapist recognizes the name. She saw his wife all the time at the building. Apparently Elizabeth has had a whole host of doctors.

Everyone knew Elizabeth was vindictive and possibly a murderer but Karen didn’t know she was that crazy. Funnily enough Elizabeth can get crazier. Why shouldn’t after she heard from her son that he slept with Karen. That would be two men that prefer Karen over her.

Savi went on her real birthday present early. A relaxing trip to Palm Springs. Once there though she sees a family with a little child and she knows she wants that for her own baby. Before she was focusing on herself but now she’s thinking about what’s best for the baby. Too bad Joss has to stall her instead of admitting she lost the results. Yet everyone needs to go to sleep and that’s exactly what Joss did. She woke up to Savi’s note saying she needs to know right now.

Joss has no choice now. She calls Savi and tells her the truth. Savi is hurt but she’s not heading back to the resort though. She tries to get back on the freeway when she gets hits by an oncoming car.

April went to Karen for advice. She knows she has to choose between Richard and Paul and the one she envisions herself growing old with turns out to be Paul. Richard forever the gentlemen understand she needs to go back to Paul although he warns her Paul won’t be the same guy she fell in love with.

April was driving to the resort when she sees Savi’s car was what caused the delays on the freeway. She tries to call Karen but she can answer her phone right now. Karen had let Elizabeth into her place only to be taken hostage by the gun wielding psycho. Right now the only person that can possible guess at her predicament is Sam. He notices the gun is missing from his father’s safe.

Everyone else is at the hospital waiting for news on Savi. Her baby is safe and Harry who also came to find about her tells Joss she should call Dominic. He is the father after all. Even with that news Harry is sticking around. He has to support Joss and parts of him doe still love Savi.

Savi makes it out of surgery just fine. Joss was the first in to see her and she was the person savi first asked if Harry was there. Savi appears to still have feelings too. Unfortunately she took his presence to mean he’s the father. He informs her otherwise when he goes in to see her. Yet they aren’t over. Harry looks like he’s going to fight for her.

Elizabeth is going to try and stage Karen’s death as a suicide but before she does her son shows up.

Paul came to the hospital to support April though this. So why does she feel guilty when she sees him ignore a call from Miranda? Is it because he’s still abandoning a family either way? April is walking by herself when Miranda calls her. She’s worried where Paul is. She and her son hadn’t heard from him in days. April can’t take it after that. She sends him back to Miranda.
Savi was telling Joss and April about how she thought she couldn’t decide between the men when she begins to flatline. She was going to tell them she wanted Harry all along.

Sam breaks into Karen’s place and both him and Karen try to fight for the gun. The gun goes off but no ones knows if someone was shot and who would that someone be?