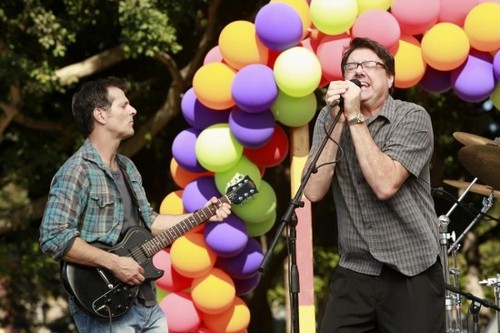 Tonight is ABC’s hit show Modern Family  continues with another new episode called ‘’A Fair to Remember.”    On tonight’s show Mitch, Cam and Lily try to enjoy the fair but Cam is in a funk from the football team’s recent losing streak, and Haley has an awkward first encounter with Andy.  Did you watch last week’s two-hour season premiere?  We did and we recapped it right here for you.

On last week’s episode when Gloria hired a too-good-to-be-true male nanny (guest star Adam DeVine), Jay and Manny were pretty much dead set against it. Frank (guest star Fred Willard) was in town and feeling a bit lonely recently, so Phil and Jay took him out to help get his groove back. And, Mitch and Cam commissioned Pepper (guest star Nathan Lane) to plan their dream wedding, but Pepper might heve been dreaming a little too big.

On tonight’ show the family attends the annual school fair and Phil has a big 20th wedding anniversary surprise planned for Claire at the fairgrounds, but unfortunately, she simultaneously has a surprise for him back at home. Gloria signs Jay up to be a fair cop for the day and it gets worse when he’s partnered up with his nemesis. Elsewhere, Mitch, Cam and Lily try to enjoy the fair but Cam is in a funk from the football team’s recent losing streak, and Haley has an awkward first encounter with Andy (guest star Adam DeVine.)

Their children kicked off the anniversary with a sweet breakfast in bed for the happy couple. Phil revealed that he is planning a surprise for Claire. His band, “The Dadbeats” will be performing a power love ballad at the School Fair for Claire.

Cam is the coach of the Freshman Football team, and his team is not doing well. Mitchell tries to convince him that it’s not that serious, and no one is judging him at the school fair. However, Mitchell is wrong. One of the parents of Cam’s players approaches him and says he is thinking of pulling his son, the star running-back from Cam’s team. Cam tries to convince him to leave his son on the team, he tells Cam he has one week to win a game or else he is pulling his son.

With everyone off at the school fair, Haley runs into the Jay and Gloria’s new manny. She tries to charm him but he isn’t interested, he has a fiancée back in Utah.

Manny isn’t interested in charming anyone, he is focused on the cake baking competition he has entered. Gloria is proud of his cake masterpiece, Jay is afraid he it makes him seem like a girl. Jay doesn’t have time to convince Manny to ditch the contest, because unbeknownst to him Gloria signed him up to be a “Fair Cop.”

Claire has something special planned for Phil’s anniversary present also. She has a surprise waiting for him at home, and tries to lure him back home. But, Phil refuses to leave the School Fair because his anniversary present to her is him singing at the fair. If they leave he won’t be able to give her his gift, and he doesn’t want to ruin the surprise.

Before Claire can convince Phil to go home, she is arrested by the Fair Police, her father Jay and his nemesis and police partner. She is “arrested” for unlawful sexiness and possession of a hot booty. She has to spend ten minutes in the School Fair Slammer.

Even though Haley skipped the School Fair, she is dealing with some drama of her own. Jay and Gloria’s new nanny, Andy, is a party pooper. All she wants to do is enjoy a few beers, and soak up some sun next to the pool, but he is breathing down her neck. Their argument ends in a shattered beer bottle on the patio, that no one wants to take the blame for.

Back at the School Fair Cam is trying to get his losing football team into shape. The solution? A pep talk and a carnival sledgehammer game. Unfortunately he isn’t strong enough to hit any level higher than a “Sassy Granny.”

Jay and his nemesis are having a hard time putting aside their differences and patrolling the School Fair. A heated argument ends in a snow-cone accident, and a ruined shirt.

Despite their scheduling conflict, Claire and Phil manage to surprise each other with their 20th wedding anniversary gifts, and “The Dadbeats” rock the School Fair. Haley finally works her charm on Andy, and he takes the heat for her and tells Jay he broke the beer bottle by the pool, and there may quite possibly be a budding relationship in the future for Haley and him. Jay and Gloria put his Fair Cop costume to good use when they head up to bed.