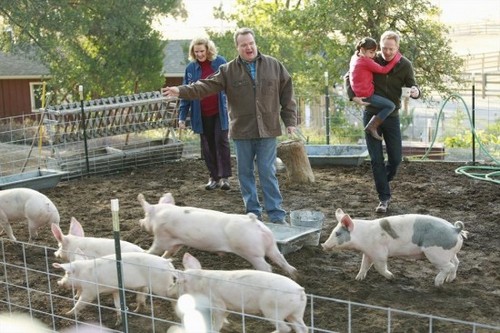 Tonight is ABC’s hit show Modern Family  continues with another new episode called “‘ClosetCon ’13.”    On tonight’s show will we discover some of Jay’s old skeletons at Closetcon’13.  Did you watch last week’s two-hour season premiere?  We did and we recapped it right here for you.

On last week’s episode the family attended the annual school fair and Phil had a big 20th wedding anniversary surprise planned for Claire at the fairgrounds, but unfortunately, she simultaneously had a surprise for him back at home. Gloria signed Jay up to be a fair cop for the day and it got worse when he was partnered up with his nemesis. Elsewhere, Mitch, Cam and Lily tried to enjoy the fair but Cam was in a funk from the football team’s recent losing streak, and Haley had an awkward first encounter with Andy.

On tonight’s show wWith some urging from Claire, Jay begrudgingly agrees to return to ClosetCon this year, and things get interesting when Jay is reunited with some old colleagues. Cam takes Mitch and Lily to the Tucker family farm for the first time and is excited to fold them into country life, that is until Grams pays an unexpected visit. And back at home, Phil, Gloria and the kids get into some mischief involving Jay’s very delicate Apollo 13 spacecraft model.

Tonight’s episode of Modern Family opens with Jay and Claire checking into a hotel for a Closet Convention, Jay is upset over the prices and WIFI.

Cam and Mitchell are in Missouri, at Cam’s Mom’s house. Mitchell thinks Missouri is misery. He’s not a fan of farming or “slopping the hogs.”

Phil and his kids are at Gloria’s. Phil discovers a mysterious room at Jay’s house, it is always locked, but since he is out of town it is unlocked. The secret room is a small closet, full of Jay’s collector toys and trinkets. Phil finds a 0 year old collector’s edition or a Space shuttle replica. He drops it and it shatters.

Jay and Claire are working the bar at the trade-show. Jay is practically a celebrity, everyone seems to know him and love him. Jay is planning a prank on Claire, since she is a convention rookie. Jay and his friends are going to plant a fake skeleton in her closet in the hotel.

Cam is upset in Missouri. He thinks that Mitchell is judging him and making fun of how his family lives.

Haley and her sister are Alex are fighting over the pizza delivery guy, they are both in love with him. Gloria tells them that they are sisters, and they can’t fight over boys, “sisters over Misters.” Gloria’s advice is a little too late, they have already glued their heads together with air plane glue.

Back in Missouri, things are getting even more miserable. Cam’s Grandma arrives at his Mom’s house, and she obviously doesn’t know that Cam is married. He introduces Mitchell as a “farmhand named Bud” and kicks him out of the house.

Claire comes back to her hotel room early and finds Jay alone in the room with a woman named Rita. Jay is scared that Claire knows about him and Rita’s deal. Twenty years ago Rita helped Jay try to get rid of Phil, by offering him an amazing job on the other side of the country (it obviously didn’t work). Claire hides in the hallway and listens to their conversation about the get-rid-of-Phil deal.

In Missouri Mitchell is preparing to take Lily to a hotel, he doesn’t want to stay with Cam if he has to pretend to be “Farmhand Bud.” Before he can leave the tornado warning horn goes off, and he can’t leave because there is a tornado coming.

Cam, Mitchell, his Mom, and Grandma are stranded together in the storm cellar together. Cam breaks to his Grandma that he is gay, about to marry Mitchell, and that Lily is his daughter. She is less than thrilled.

Phil is video chatting with his father, he is helping him put the Apollo 13 replica back together. He is trying to fix it before Jay comes home. Gloria is busy trying to unglue Haley and Alex’s hair.

Back at the Closet Convention, Claire reveals to Jay that she knows his secret, she thinks he had an affair with Rita. Jay reveals that his secret is that he tried to get rid of Phil. Claire is irate. But, the way that he sees it they are even, seeing as how he knows Claire called immigration on Gloria a few years ago. Once they settled their differences, Jay admits that he did make out with Rita once though.

With an inspirational pep-talk from his Dad via video chat, and the support of his kids and Gloria, Phil manages to successfully reassemble Jay’s Apollo 13 replica.